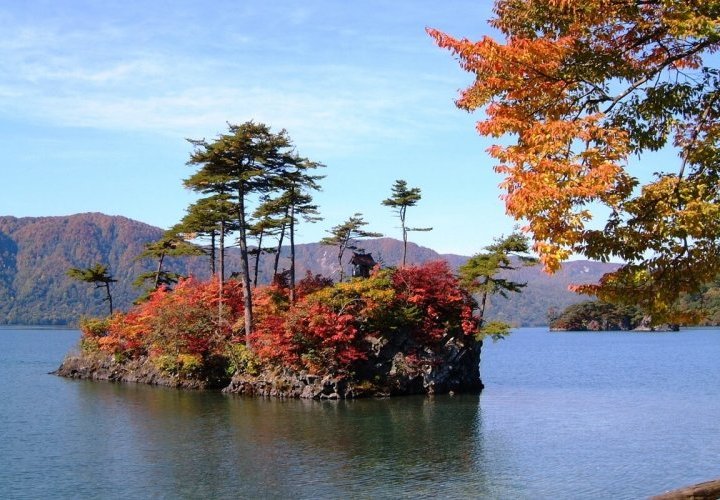 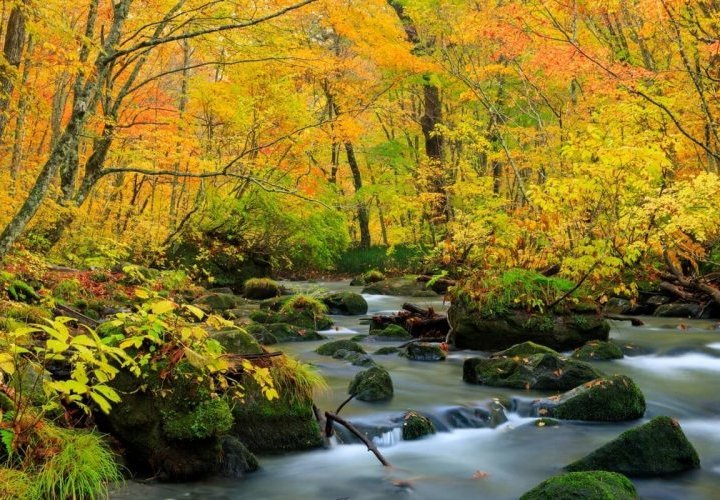 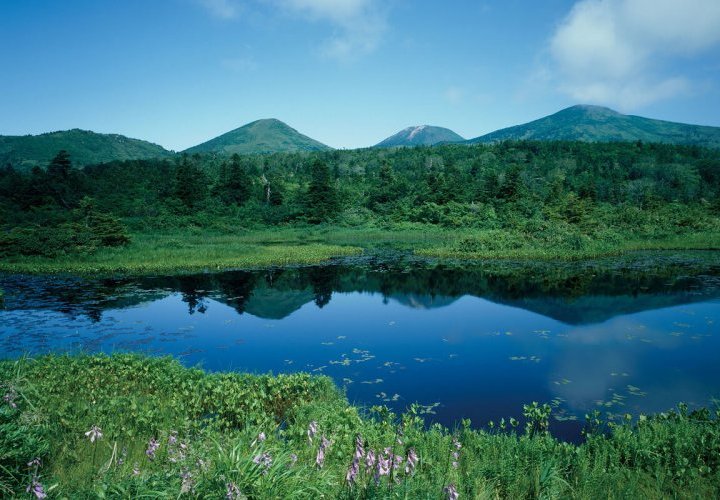 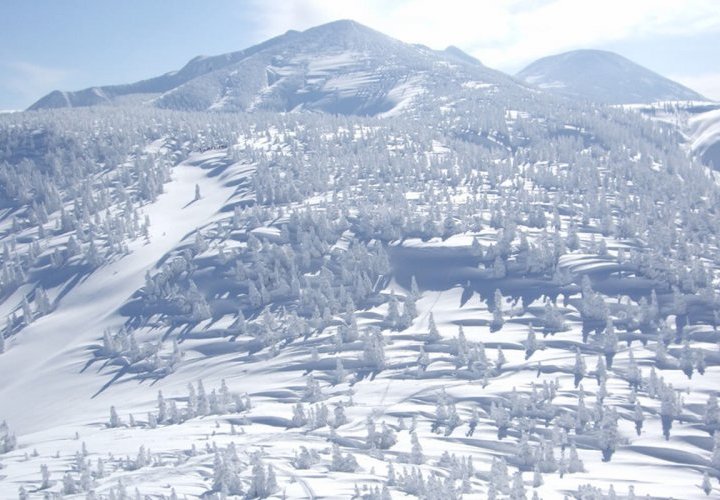 Towada Hachimantai National Park is located along the volcanic interior mountains of the northern Tohoku region and covers some of Japan’s most beautiful natural wonders such as Lake Towada and the Oirase Stream, the broadleaf forests famous for their autumn colours and alpine plants of Hachimantai. It comprises two separate areas: the northern area that encompasses Lake Towada, the Hakkoda Mountain Range, and most of the Oirase River Valley, and the southern Hachimantai area including Mount Hachimantai, Mount Iwate, Tamagawa Onsen, and Mount Akita-Komagatake. The two areas cover 854 km2 and are 50 kilometres apart. The national park has many hiking trails as well as a ropeway that runs all year round and rustic hot springs, such as Nyuto Onsen and Kunimi Onsen.
As mentioned above, the northern area includes Lake Towada, more
a caldera lake formed by volcanic activity that has a quiet surface and is surrounded by rich greenery that covers the area from the lakeside and creates a primeval landscape. This place is designated as Japan’s Special Place of Scenic Beauty and a Natural Monument. There is only one river that flows out of Lake Towada and this is the Oirase River. On its way, it carved out a U-shaped valley approximately 14 km long named the Oirase Mountain Stream, which was designated as Japan’s Special Place of Scenic Beauty and a Natural Monument. The Hakkoda Mountain Range with its highest peak - Mt. Odake (1,585 m) spans a group of volcanoes from Mt. Takada-Odake and Mt. Akakura to Mt. Kushigamine, Mt. Komagamine, Mt. Norikura, and Mt. Yokodake that continue on to the south. At the foot of the mountains, there are many therapeutic hot springs, such as the Jogakura, Sukayu, Sarukura, Yachi, and Tsuta onsens.
The southern Hachimantai Area is a volcanic plateau formed by multiple volcanoes (about 40), including lakes, marshes, and moors, such as Hachiman Pond and mountain landscapes. At the foot of the mountains, there are many hot springs popular for their therapeutic properties such as Goshogake onsen, Fukenoyu onsen, and Toshichi onsen. Mt. Akita-Komagatake is formed by a group of volcanoes (the highest peak - Mt. Oname reaches 1,637 m above sea level), and numerous caldera crater hills and is known for the alpine plants such as the Dicentra peregrina and Takanesumire (Viola crassa). The area near the summit is designated a special protection area and Natural Monument of Japan. Mt. Iwate (2,038 m above sea level), a stratovolcano made up of two volcanoes, Mt. Higashi-Iwate and Mt. Nishi-Iwate, offers you a 360-degree view from the summit, where you can see Mt. Akita-Komagatake, Mt. Hachimantai, and Mt. Hayachine as well as Mt. Chokai in the distance. On the northeastern slope of Mt. Iwate, you can see the Yakebashiri lava flow that is a rocky field formed by lava that spilled from the hillside and was designated a Special Natural Monument of Japan. 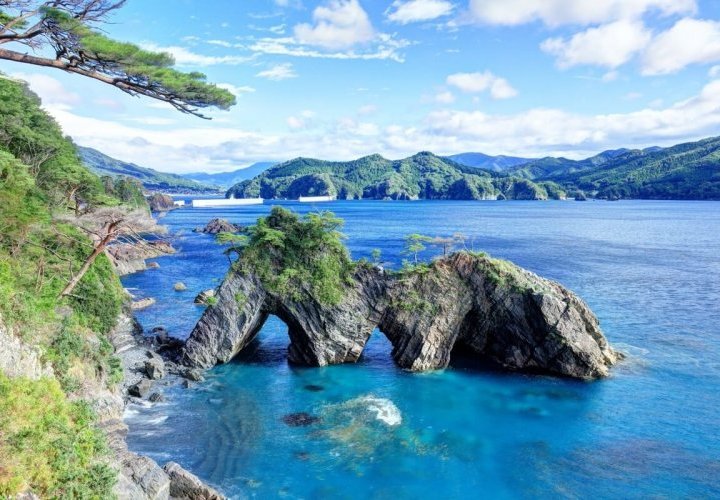 Sanriku Fukko (Recovery) National Park covers a land area of 28,537 hectares and was created in May 2013 in order to contribute to the reconstruction of the Sanriku region that was devastated by the earthquake in 2011. Stretching for over 300 km along the Pacific Coast of Tohoku region, spanning Aomori, Iwate and Miyagi prefectures, the Sanriku Coast is a rocky shoreline with countless bays, cliffs and coves and a great part of it is included in the park. This area is particularly important as a breeding ground for seabirds, such as the black-tailed gull and the streaked shearwater and birds of prey such as the peregrine falcon and the osprey. The area is also a habitat for rare vegetation such as the community of Shirobana Shakunage (rhododendron) in Kitayamazaki and the virgin forest of tabu trees in Funakoshi Oshima Island.
In this region there are some of Japan’s largest fishing ports at Hachinohe, more
Miyako, Kamaishi, Ofunato, and Kesennuma. Organisms such as greenling, rock fish, sea urchin, and abalone also inhabit this area. 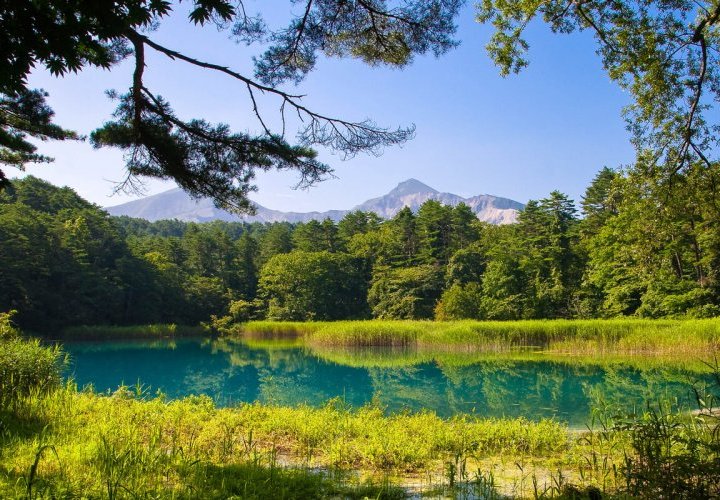 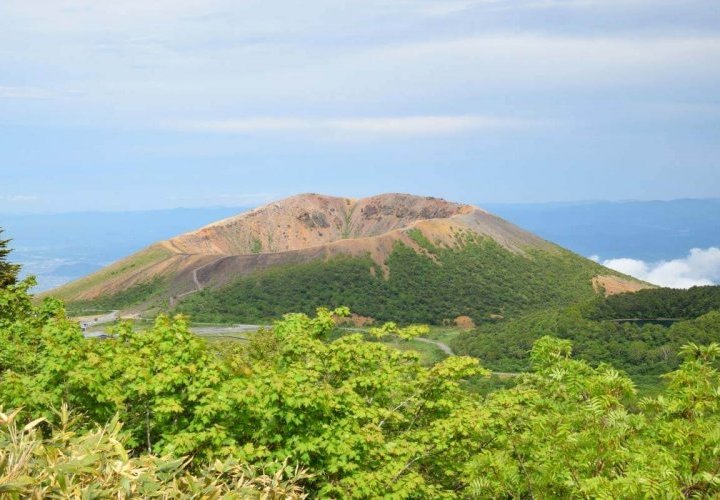 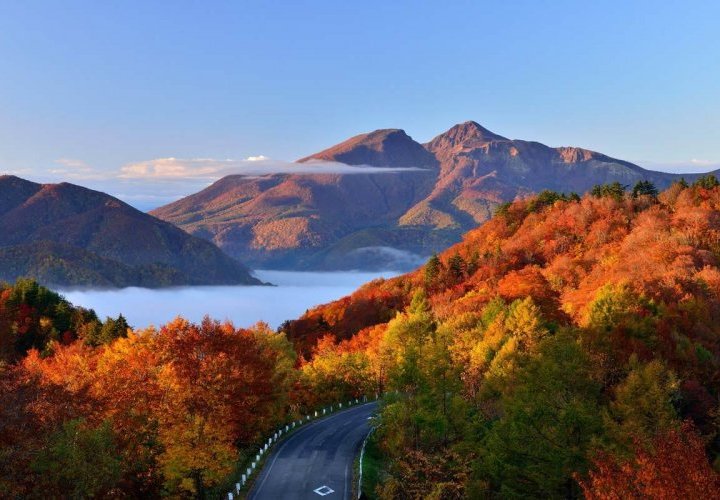 Bandai Asahi National Park covers a vast area (186,389 ha) in the southern Tohoku region from Dewasanzan, Asahi, Iide, and the Azuma Mountain Ranges, to Mt. Bandai and Lake Inawashiro. It is Japan’s second largest national park on land with beautiful mountains, forests and lakes. The fauna of the park is diverse and includes antelopes, black bears, Japanese serows, birds, mammals, and other species of wildlife. Outdoor activities such as hiking, bird watching and winter sports can be enjoyed around the area.

Mt. Dewasanzan is famous as a place of mountain worship from where you can gaze upon the Asahi and Iide peaks and Mt. Bandai. You can also enjoy the beautiful sights of hills and numerous lakes and marshes from vantage points in the Urabandai area and Lake Inawashiro. more
Dewasanzan Mountain’s body was formed from the accumulation of debris from the volcanic eruptions of Mt. Gassan (1,984 m above sea level) over the folded mountains. The peak of Mt. Gassan consists of snow patch grasslands, marshes, windswept grasslands, and communities of dwarf stone pine, and creates a landscape of “faux alpine belt”.
The Asahi and Iide Mountain Ranges stand out for their well-preserved highly primitive natural environment and visitors can enjoy the mountainous views surrounded by majestic mountains and the tender beauty of a flower field after a long walk. Asahi Mountain Range with its main peak, Mt. O-asahi (1,870 m above sea level) is a non-volcanic mountain range that consists on the west side of gentle slopes of periglacial terrain and on the east side of steep slopes created from nivation. Dense forests that nurture diverse flora and fauna and are a habitat for larger mammals and birds of prey, cover the foothills and mountainsides of this region. Iide Mountain Range consists of mountains with peaks around 2,000 m with the main peaks being Mt. Iide (2,105 m above sea level) and Mt. Dainichi (2,128 m above sea level). This is a non-volcanic mountain range formed by the swelling of the sea floor from tectonic activity, consisting of gentle slopes of periglacial terrain on the west and steep slopes created from nivation on the east. At the foot of Iide Mountain Range a primitive landscape of primeval Japanese beech forests can be noticed.
The landscape around the Azuma Mountain Range and Mt. Bandai is very varied and dynamic, including lakes and marshes of various sizes, volcanoes and rich forests. The visitors can enjoy different activities such as mountain climbing, exploring nature, going to hot springs, and skiing. Mt. Bandai, the Azuma Mountain Range, and Mt. Adatara were formed through volcanic activity and you can admire Goshiki Pond at the crater lake close to the peak of Mt. Issaikyo in the Azuma Mountain Range. The waters of the pond convey mystical hues of cobalt blue, emerald green, and various other colours. Along the years, Mt. Bandai has had various phreatic eruptions and the debris avalanche had dammed the river to form more than 300 lakes and marshes including Lake Inawashiro and Lake Hibara in Urabandai area. Located on the north side of Mt. Bandai, this area is famous for the transitional forest of red pine and Japanese alder. Numerous hot springs can be visited in the area around the Azuma Mountain Range, such as Takayu and Tsuchiyu, which offer to travellers and mountain climbers a genuine comfort and relaxation.
View country