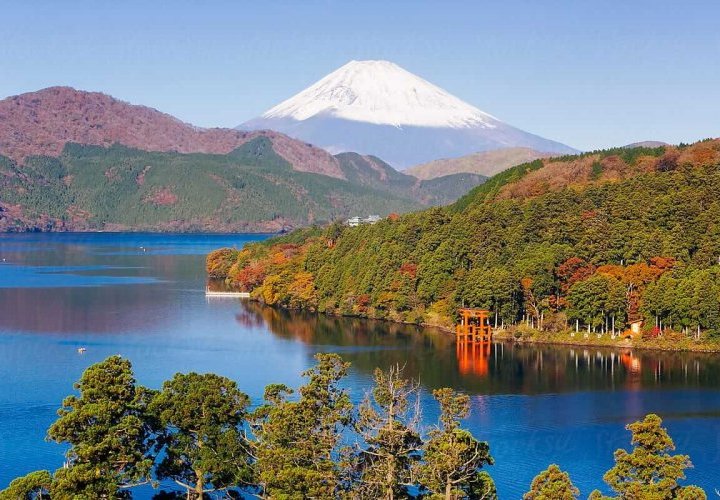 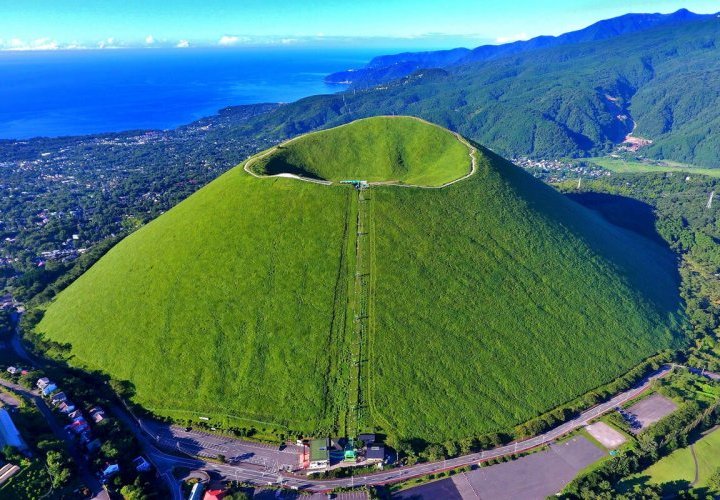 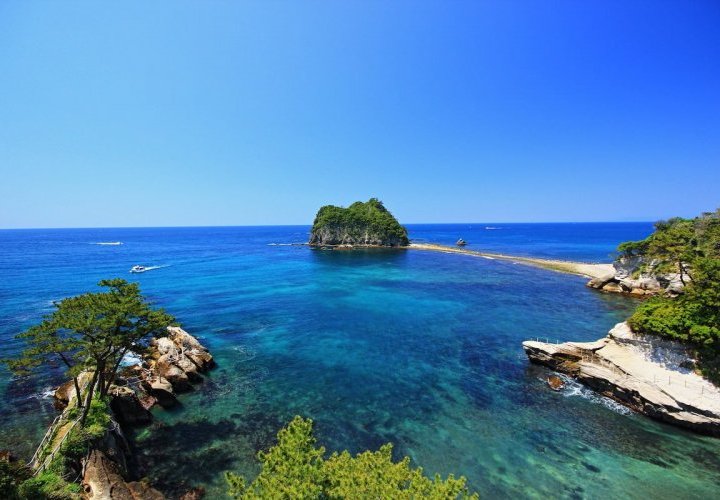 Fuji Hakone Izu National Park has an area of 121,695 ha (land area) and is Japan’s most visited national park. It is divided into four areas such as Mt. Fuji Area, Hakone Area, Izu Peninsula Area and Izu Islands Area including many interesting spots that can be easily reached from Tokyo.
Mt. Fuji Area is centred on Mt. Fuji and includes lakes, swamps, and plateaus in the surrounding area. Mt. Fuji is the highest of Japan’s mountains reaching an altitude of 3,776 m and its beauty is renowned worldwide. It has more than 70 lateral cones (small volcanoes created on the side or at the foot of a mountain) on its slopes, including Mt. Hoei and Mt. Omuro and provides graceful views to its visitors. The lava flows from these volcanoes created the Fuji Goko Lakes (Lake Yamanaka, Lake Kawaguchi, more
Lake Saiko, Lake Shoji, and Lake Motosu) which are also part of the national park. They are the result of the volcanic activity of Mount Fuji, and it is possible to cross them in a kayak or go hiking around the lakes and admire Mount Fuji’s reflection in the waters. In addition, there are many natural caves and waterfalls and you should certainly visit Shiraito-no-Taki, which is among the most beautiful waterfalls in Japan. The water off the curved rock wall measures 20 m high and 200 m wide and it looks like vertically arranged thin strands of a silk thread (Shiraito).
Hakone Area has been renowned through the ages as a hot spring area due to its natural onsen, while due to the variety of volcanic landforms, it is also referred to as a Volcano Museum. The mountains created by repeated volcanic eruptions bear the collective name of the Hakone Volcanoes. Due to the collapse of Mt. Kamiyama - the highest peak of the Hakone Volcanoes, approx. 3,000 years ago, and further blocking of a river, Lake Ashinoko was formed. The lake offers you a breathtaking scenery and gives a glimpse of the beautiful Mount Fuji. You can also visit the Sengokuhara and Owakudani Valley, where fumarole phenomena can still be seen today. Following a hiking trail at the Owakudani Valley you will be able to cross unusual volcanic landscapes.
Izu Peninsula Area offers the appeal of Amagi Mountain Range, richly varying coastlines and hot springs. The Izu Peninsula was created as a result of movement of the volcanic islands and undersea volcanoes in the Southern Ocean northward on the Philippine Sea Plate, colliding with Honshu, and this volcanic activity and crustal movement still continues today. The area has many hot springs, Suruga Bay - the deepest bay in Japan and beautiful coastline. You can admire the sunset at Cape Irozaki, walk through the precious beech forest of Amagi Mountain or visit Shirahama beach (800 m long), one of the most famous of Japan and a good place for watching, sunbathing, surfing, swimming and snorkelling. It is known for its crystal white sand and clear blue water and is definitely worth visiting taking into consideration that it takes only around 3.5 hours to travel from Tokyo to Shirahama Kaigan (Tokyo Station - Shimoda Station - Shirahama Kaigan) combining train and bus.
Izu Islands Area comprises the volcanic islands located in the Pacific Ocean between 120 km and 290 km almost south of Tokyo referred to as the Izu Shichito Islands (“Seven Islands of Izu”): Oshima, Toshima, Niijima, Kozujima, Hachijojima, Miyakejima, and Mikurajima, but there are in fact more than a dozen islands and islets. Nine of the islands are inhabited including those mentioned above and also Shikinejima and Aogashima Islands. The largest of them is Oshima (91.06 square kilometres). Each of the islands has its character and is known for distinctive features: Oshima and Miyakejima as highly active volcanoes even today, Hachijojima for its well-preserved unique culture, Mikurajima for dolphin watching, Niijima for its numerous beaches, Kozujima for its white sandy shores, Miyakejima for 2001 volcanic eruption.

Established as one of the first national parks in 1934, Chubu Sangaku National Park has an area 174,323 ha and encompasses the Northern Japan Alps, a volcanic mountain range known for their beautiful natural scenery and alpine views. The park includes several 3,000 m high mountains including Mt. Shirouma, Mt. Tsurugi, Mt. Tateyama, Mt. Yarigatake, and Mt. Norikura located at the southern end of the park.
The area is dotted with steep rock cliffs, alpine belts, glacier-eroded valleys, lakes, numerous rivers of abundant water flow, lava plateaus formed by volcanoes. The park lies within the heavy snowfall mountain terrain, so some snow over the valleys lingers until summer months. In the park, there are small to large gorges and you can see Japan’s three famous snowy gorges: the Tsurugisawa Daisekkei Gorge, more
the Hakuba Daisekkei Gorge, and the Harinoki Daisekkei Gorge.
The park includes popular attractions such as Kamikochi, a highland plateau famous for its beautiful mountain scenery and the Tateyama Kurobe Alpine Route, as well as several famous ski resorts including Hakuba and hot spring towns. 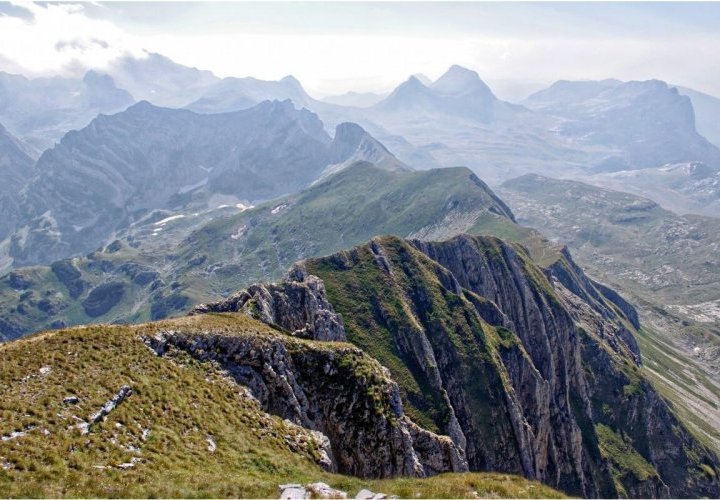 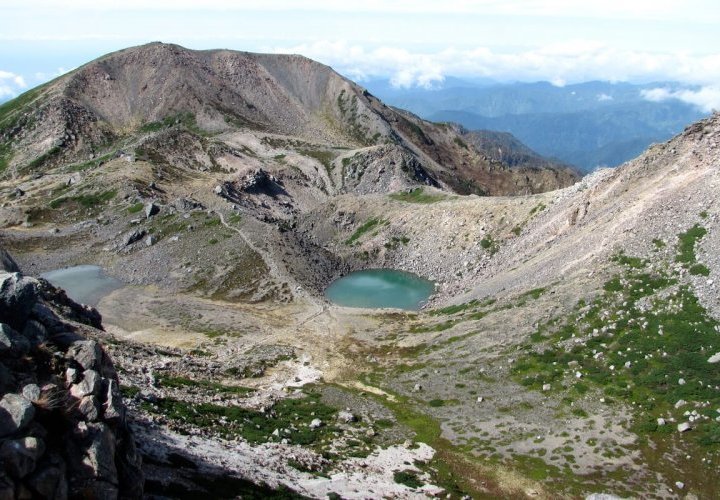 Hakusan National Park was established in 1962 and is stretching approximately 40 km north-south and 30 km east-west on an area of 49,900 ha. As the national park with one of the highest levels of naturalness in Japan, it has been designated a Biosphere Reserve in accordance with the UNESCO Man and the Biosphere Programme (MAB).
Hakusan National Park is centred around the iconic Mt. Hakusan, the highest mountain in western Japan and an important spiritual symbol. Although covered in snow for much of the year, the mountain has an expansive natural forest and becomes a popular hiking destination in the warmer months.
Besides Mt. Hakusan, the park comprises other high peaks such as Gozengamine (2,702 m above sea level), Onanjmine (2, more
684 m above sea level), and Kengamine (2,677 m above sea level). Together with the crater lakes of the Shin-Hakusan Volcano and plains formed by lava and pyroclastic materials, these peaks offer a stunning volcanic landscape. At the foot of the mountains where altitudes of 1,600 m or less predominate, there are expansive natural forests comprising Japanese beech, while in alpine and subalpine belts some 250 species of alpine plants can be seen including the Siberian dwarf pine, Maries’ fir, chocolate lily, and Aleutian mountain heath.The park is a habitat for the Asian black bear, Japanese serow, golden eagle, alpine accentor, Japanese stoat, Azumi shrew and other animals and birds.
Mt. Hakusan is known as a sacred mountain opened up in 717 by Taicho Daishi, an Echizen priest, as well as one of Japan’s three most famous mountains alongside Mt. Fuji and Mt. Tateyama. Okunomiya Mountain Shrine located at the summit of Gozengamine belongs to the Shirayamahime-jinjya Shrine in Hakusan city, which is venerated as the head shrine of more than 3,000 Hakusan Shrines nationwide.
View country