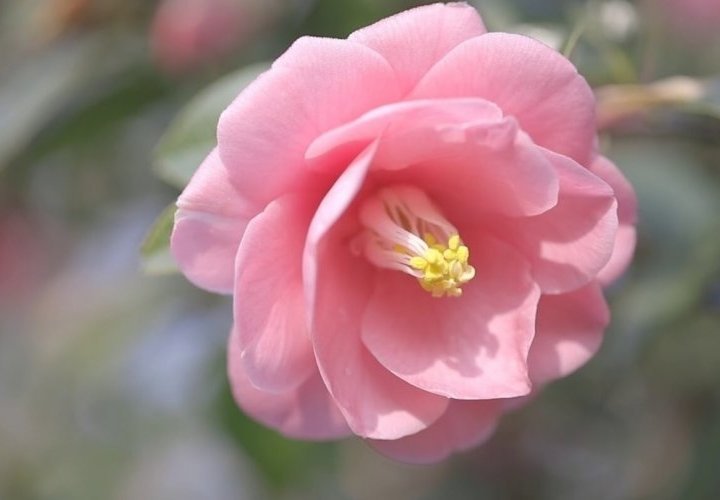 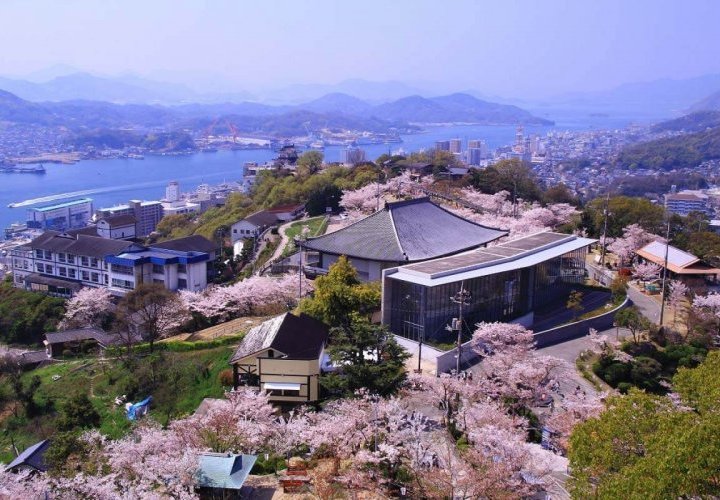 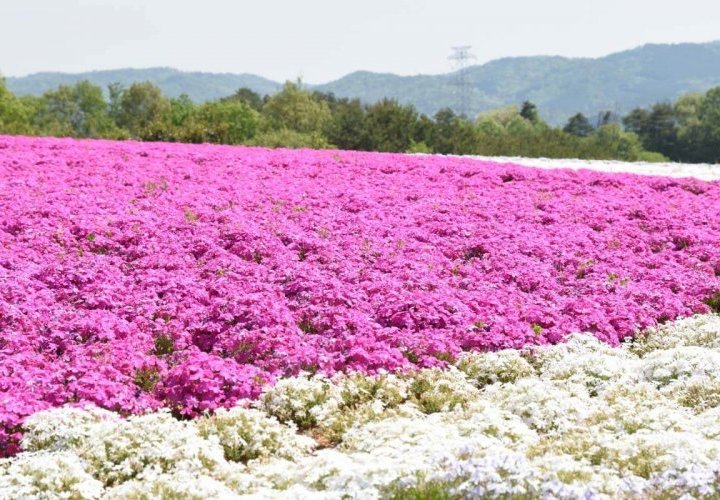 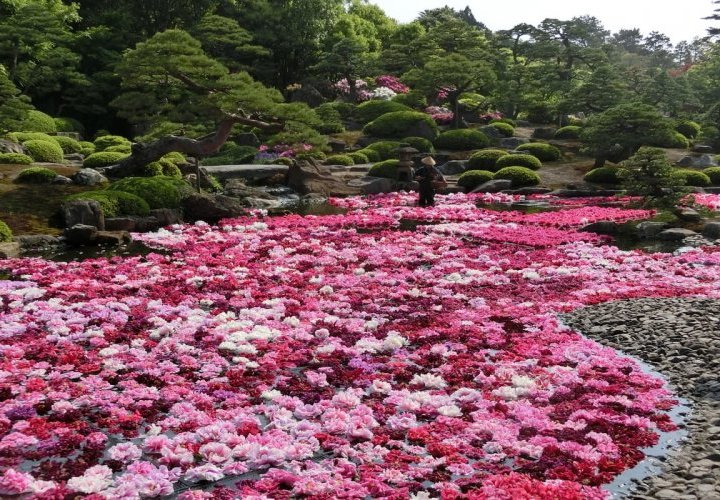 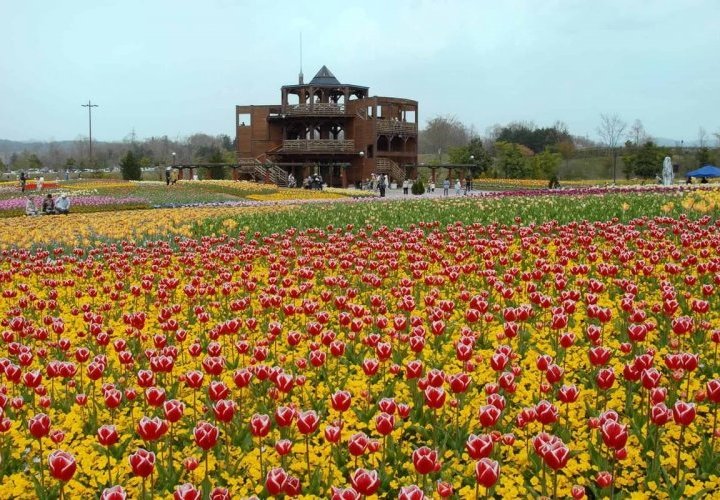 Camellia at Kasayama Camellia Grove, Hagi (late December to late March)
The beautiful hidden Kasayama Camellia Grove located in Hagi city, Yamaguchi Prefecture is home to about 25,000 Camellia Japonica trees that grow in wild at the foot of Mt. Kasayama. The grove covers an area of 10 ha offering a fantastic view during the camellia blossom season from late December to late March. Camellia is the emblematic flower of Hagi city and Hagi Cammelia Festival is held here from mid-February to late March offering you the possibility to enjoy the flowers at their peak viewing time, attend tea ceremony and theatre events and purchase Hagi products.
Daffodil in Bihoku Hillside Park, Shobara (early March to early April)
Bihoku Hillside Park is a large flower park in Shobara city, more
Hiroshima Prefecture. The “Hana-no-Hiroba” (Flower Plaza) is filled with 1.5 hectares of many flowers during the spring and autumn. An impressive view of 1,400,000 daffodils can be enjoyed from early March to early April in the park.
Cherry blossoms on Miyajima Island, Hatsukaichi (late March to early April)
About 1,900 cherry blossom trees can be admired in the parks, near the shrines or along the roads of Miyajima Island. One of the island’s top spots for viewing the cherry blossoms is the area around Tahoto Pagoda. You will see a wonderful scenery created by the 15.6 m high traditional Japanese-style pagoda and the cherry blossoms in the foreground, and the blue Seto Inland Sea and the vermilion Great Torii of Itsukushima Shrine in the background.
Cherry blossoms along the Asahi River, Okayama (late March to early April)
The Asahi River Sakura Road is on the eastern side of Okayama Korakuen Garden and boasts 200 cherry blossom trees, from Horai Bridge to Aioi Bridge. The cherry trees stretch for 1 km along the riverbank of the Asahi River and are admired by many people during the blooming season.
Cherry blossoms at Inaba Senbonzakura, Tottori (late March to early April)
Inaba Senbonzakura is an off the beaten track place to enjoy the cherry blossoms in Tottori. Senbonzakura literally means 1,000 cherry trees, which were planted along the road heading to Fuse Sports Park and on the gentle hills of the park. During the hanami season, the cherry blossoms are illuminated, so that the visitors could enjoy their beauty even at night.
Cherry blossoms in Kyusho Park, Tottori (late March to early April)
Every spring, 400 cherry trees come into full bloom around Tottori Castle Ruins in Kyusho Park, making this place one of Japan’s top 100 cherry blossom viewing spots. Jinpukaku mansion, a French renaissance-style building of the Meiji era, as well as the Tottori Prefectural Museum, dedicated to nature, history, folklore, and art of Tottori Prefecture are important attractions in the area.
Cherry blossoms in Miyama Park, Tamano (late March to mid-April)
Miyama Park is a great place for tourists due to its 300 varieties of 150,000 flowers and trees, ponds, hills, walkways, sports grounds, open areas and gardens that entertain the visitors. In spring, 7,000 cherry blossom trees welcome the viewers.
Cherry blossoms in Senkoji Park, Onomichi (early to mid-April)
Senkoji Park is listed as one of the top 100 cherry blossom viewing spots in Japan due to its 1,500 cherry trees of different varieties including Somei Yoshino, Weeping cherry, Double-Flowering cherry, etc. Inside the park, you will find Senkoji Temple, a Buddhist temple of the Shingon sect. Its vermillion lacquered main hall is a symbol of Onomichi. At the top of the park, there is an observatory, from where you will be able to enjoy sweeping views of Onomichi city and the islands of the Seto Inland Sea. In clear weather, you can even see the distant mountains of Shikoku. The magical night view that spreads out below the observatory is considered one of the top 100 night views in Japan.
Tulip, poppy and nemophila in Bihoku Hillside Park, Shobara (early April to late May)
Bihoku Hillside Park features many kinds of flowers from cherry blossoms to poppies, tulips and nemophilas (baby blue eyes). Such colourful spring flowers as tulips, poppies and nemophilas are in bloom from early April to late May and can be admired all together! The park also offers an interactive play area where visitors can enjoy lawn sledding, golfing, Frisbee golfing, canoeing and has several restaurants.
Moss phlox in Kamu no Sato Rokutan Park, Sera (mid-April to early May)
Located in Sera city, Hiroshima prefecture, Kamu no Sato Rokutan Park is home to 800,000 moss phlox flowers that bloom vividly in 4 different colours on a hill stretching over 50,000 square metres. There are pathways all around the park from where you can enjoy the spectacular panoramic views of the vast fields of flowers.
Peony in Yushien Garden, Matsue (late April to mid-May)
Yushien Garden is an idyllic garden located on Daikonshima Island in the middle of the brackish Lake Nakaumi, in Matsue city, Shimane Prefecture. It opened in 1975 and features several traditional landscape garden elements, including a central pond, a waterfall, streams, Yukimi (snow viewing) lanterns, a rock garden and a variety of seasonal flowers displayed over an area of 40,000 square metres. The garden is most known for its peony flowers that burst into bloom from late April to mid-May. About 20,000 peonies of 250 species colour the garden with their beautiful shapes and scents. One of the season’s highlights that can only be seen here is the scenery of thousands of peony flowers floating on the surface of the pond that lasts for only one week per year, usually from late April to early May. The Spring Peony Festival is also held from late April to mid-May in the garden. If you can’t make it during the flowering season, you can visit the on-site greenhouse known as the “Japanese Peony House”, where you can see the peonies in bloom throughout the year. 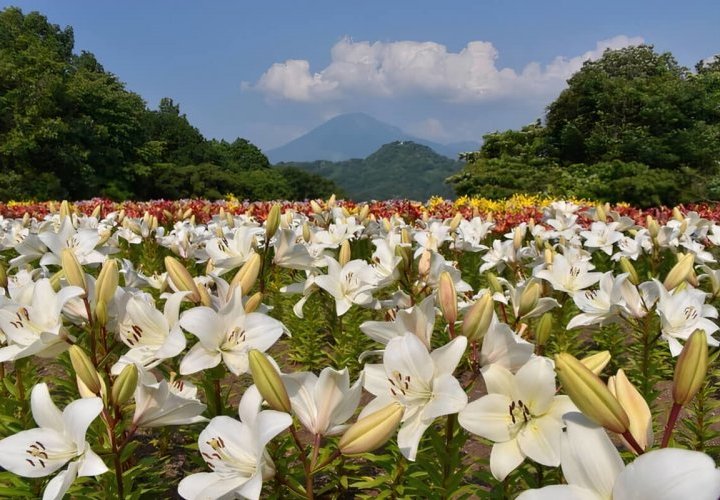 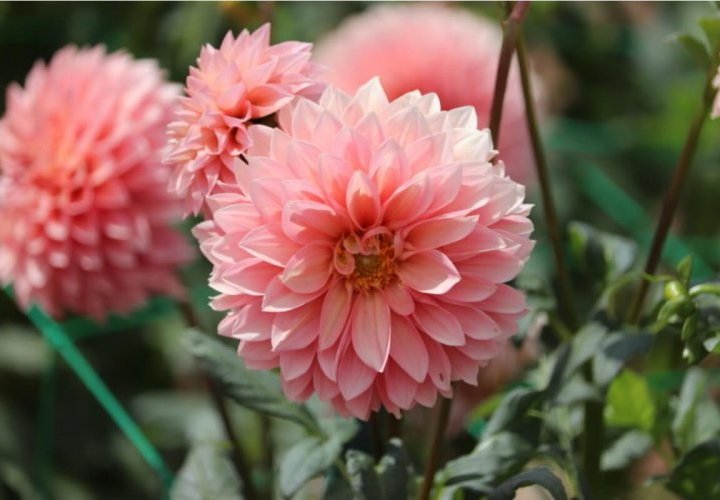 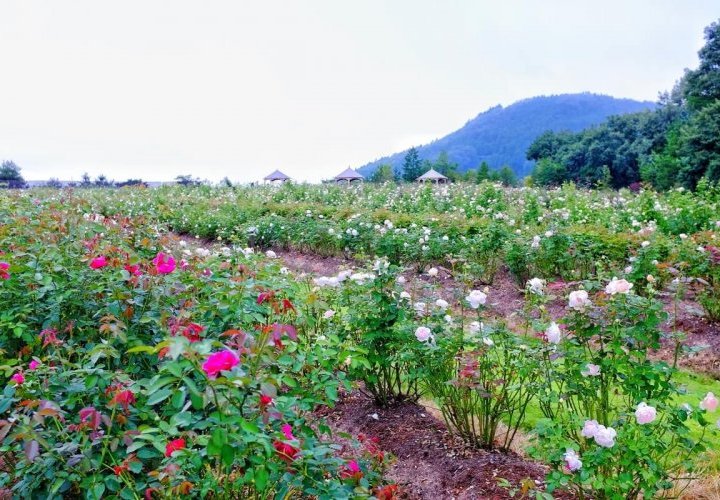 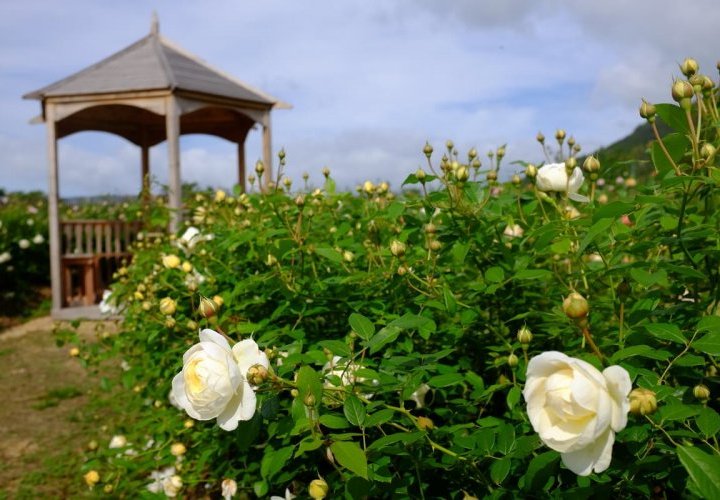 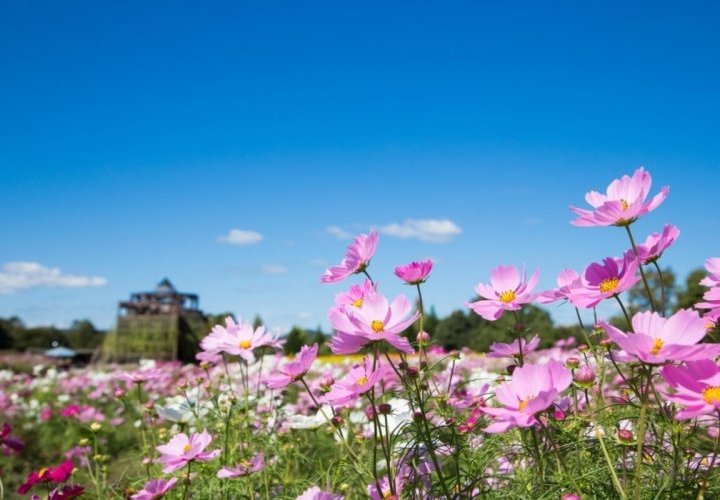 Lily in Tottori Hankairo Flower Park, Nanbu (mid-May to late July)
Located in the town of Nanbu in Saihaku-gun, Tottori Prefecture, Tottori Hankairo Flower Park is a large flower park in Japan stretching over an area of about 50 hectares. A free shuttle bus runs from Yonago Station in the nearest Yonago city offering you the possibility to reach the park in about 25 minutes. The park is a flower paradise where you can enjoy various flowers in all the four seasons with views of the majestic Mount Daisen, including tulip, Iceland poppy, lily, rose, cosmos, salvia, sasanqua, viola and pansy. However, the main flower of the park is the lily. Around 100,000 colourful lilies of 100 varieties bloom here offering a spectacular view with Mount Daisen as a “borrowed background”.
Rose in Tottori Hankairo Flower Park, more
Nanbu
(mid-May to late June; mid-October to mid-November)
The stunning fifty-hectare flower park located at the foothills of Mt. Daisen is a must-see place for any visitors who have an interest in flora, landscape design or photography. Tottori Hankairo Flower Park located near the city of Yonago, includes a Rose Garden with splendid roses that is best to be visited at the heights of the season from May to June and October to November.
Dahlia at Sera Kogen Farm, Sera (early September to late October)
About 550 types of dahlia are planted in the dahlia flower garden stretching over an area of 15,000 square metres at Sera Kogen Farm. Here you can admire dahlias of various shapes and sizes, from traditional-looking ones resembling chrysanthemums to large and flamboyant ones. Furthermore, from early September to late October, the Autumn Dahlia Festival is held at the garden. If you are looking for the perfect autumn flower spot, you should definitely visit this awesome dahlia garden.
Rose at Sera Kogen Farm, Sera (mid-September to early November)
Sera Kogen Farm has a charming Rose Garden where many varieties of roses can be admired during the flowering season, including “Sora no Hako Niwa” variety and the English rose called Masako, which was named in honour of the Empress’s wedding. From mid-September to early November, the Autumn Rose Festival is held at the garden allowing you to admire the fragrant and deep coloured roses.
Cosmos and zinnia in Bihoku Hillside Park, Shobara (mid-September to mid-October)
Bihoku Hillside Park located in Shobara city is home to 1.8 million cosmos flowers offering a beautiful colourful scenery in autumn. Bihoku Cosmo Picnic flower event is held at the flower square of the park in order to celebrate the flowers in bloom. Besides cosmos flowers, you will also see thousands of zinnias that blossom in the garden at the same time as cosmos flowers. The colours of the blooming flowers spread across the landscape offer a spectacular view.
View country