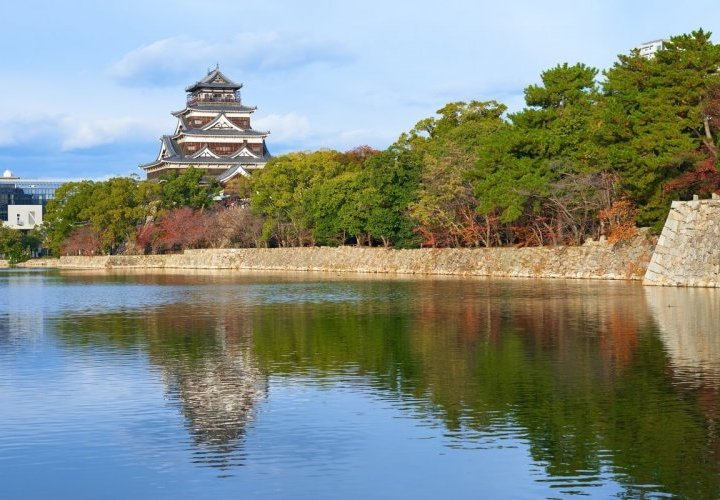 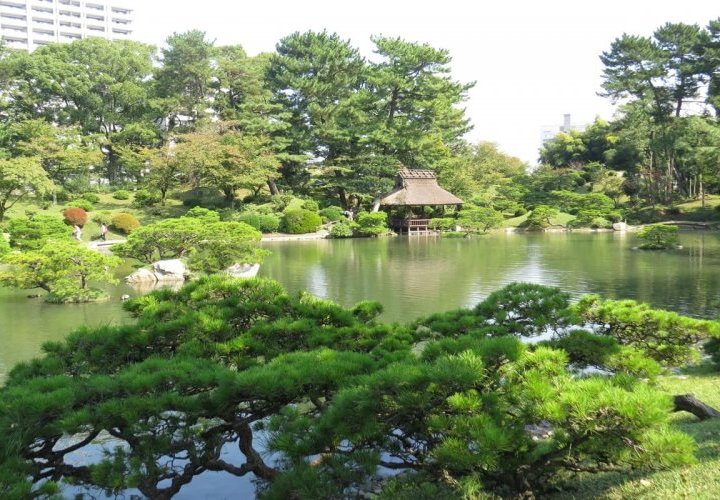 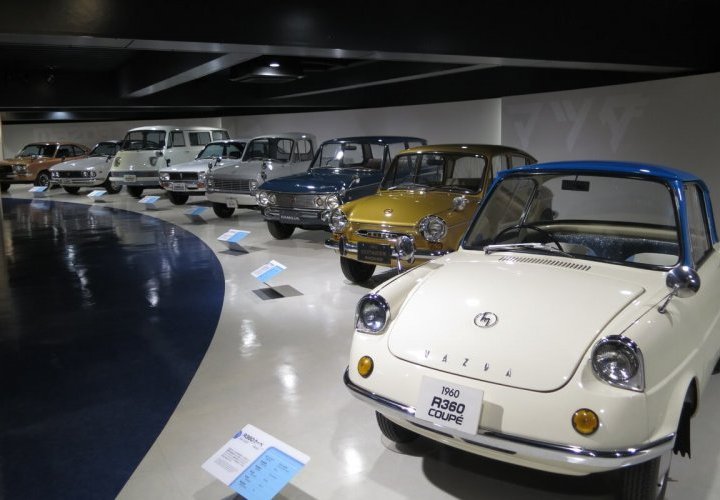 Chugoku region is the westernmost region of Honshu and includes the following prefectures: Hiroshima, Okayama (only Bitchu Province), Yamaguchi, Shimane, and Tottori. It is characterized by irregular rolling hills and limited plain areas and is subdivided into two different parts: the heavily urbanized and industrialized Sanyo region along the Seto Inland Sea and the much more rural Sanin region along the Sea of Japan coast.
Hiroshima is the capital of Hiroshima Prefecture in Japan and the main city of Chugoku region. It is home to over a million inhabitants and according to data in June 1, 2019, the city had an estimated population of 2.089 million. Hiroshima was founded in 1589 as a castle town on the Ota River delta and quickly grew as a major urban centre and industrial hub. In 1889, it officially gained city status. more
The city was a centre of military activities and experienced the destructive consequences when the first atomic bomb was dropped over Hiroshima on August 6, 1945 towards the end of World War II. After the war, Hiroshima was rebuilt and became the largest city in Chugoku region.
TOURIST ATTRACTIONS IN HIROSHIMA
Hiroshima Castle
Hiroshima Castle, sometimes also called Carp Castle, was built primarily of wood and pine in 1589 by the powerful feudal lord Mori Terumoto. It was an important seat of power in Western Japan and was designated a National Treasure in 1931. While it was spared from the demolishment that many other castles met during the Meiji Restoration, the castle was destroyed by the atomic bombing on August 6, 1945.
It was rebuilt in 1958 and has five floors that stand 26.6 metres above the stone foundation. Its main keep is primarily made of ferro-concrete with an attractive, partially wooden exterior. Inside the keep, there is an informative museum on the history of Hiroshima and the castle before World War II. Also, some structures of the Ninomaru, the castle’s second circle of defence, were reconstructed in more recent years using original building methods and materials, including the castle’s main gate and two turrets.
Hiroshima Peace Memorial Park
Hiroshima Peace Memorial Park is dedicated to the memories of the direct and indirect victims of atomic bombing (of whom there may have been as many as 140,000) of Hiroshima as the first city in the world that suffered a nuclear attack. It was built on an open field that was created by the explosion on the area where there was the political and commercial heart of the city.
Today on an area of over 120,000 square metres, there are a number of memorials and monuments, museums, and lecture halls. The main facility of the park is the Peace Memorial Museum that consists of two buildings and focuses on the history of Hiroshima and the events of August 6. Another facility is the A-Bomb Dome, also known as the Hiroshima Peace Memorial. As the former Prefectural Industrial Promotion Hall, the building served for the promotion of Hiroshima’s industries and was one of the few buildings to remain standing when the bomb exploded. The A-Bomb Dome represents a tangible link to the past of Hiroshima and was designated a UNESCO World Heritage Site.
Shukkeien Garden
Shukkeien Garden is a historic Japanese garden in Hiroshima, whose name can be translated into English as “shrunken-scenery garden”. Valleys, mountains, and forests in miniature represent the landscape of the garden that has many features of the traditional aesthetics of Japanese gardens. The construction of the garden started in 1620 at the order of Asano Nagaakira, feudal lord of Hiroshima han. Asano family donated the gardens to Hiroshima Prefecture and in 1940 they were opened to the public. Shukkeien suffered extensive damage from the nuclear attack on Hiroshima and then became a refuge for victims of the war. It reopened in 1951 after renovations.
The entire garden is connected by a path that winds around the main pond at the centre of the garden and passes through all of the miniaturized sceneries. Around the main pond, there are a number of tea houses, which offer visitors impressive views of the surrounding scenery.
Mazda Museum
Mazda Museum is Mazda Motor Corporation’s “Museum” and offers an overview of the history of Mazda up to the present day, a look into the technology of its automobiles and the prospects for its future developments.
Mazda Motor Corporation was founded in Hiroshima in 1920 and still has its corporate headquarters in the city, while also owning large areas of land used for research and development laboratories, factories, and shipping facilities. The same as Toyota in Nagoya, Mazda plays a large role in Hiroshima's economy producing over a million cars a year.
The company’s museum and part of the factory are made available for public viewing. The facilities can only be seen during a guided tour that passes through an actual vehicle assembly line, where the visitors can see a variety of different car models being produced. 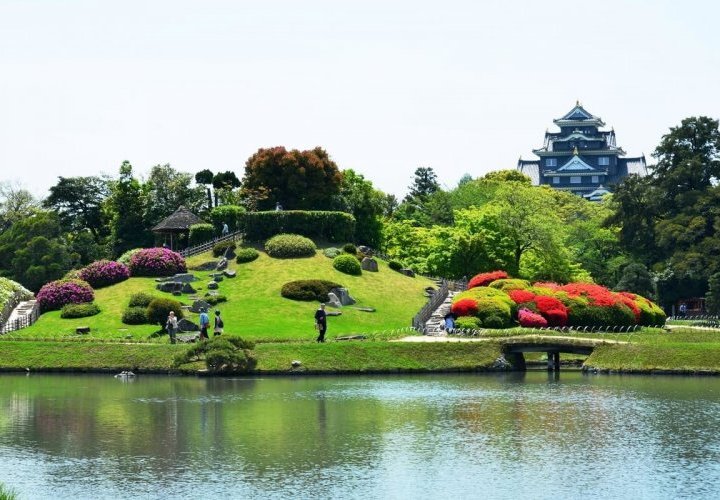 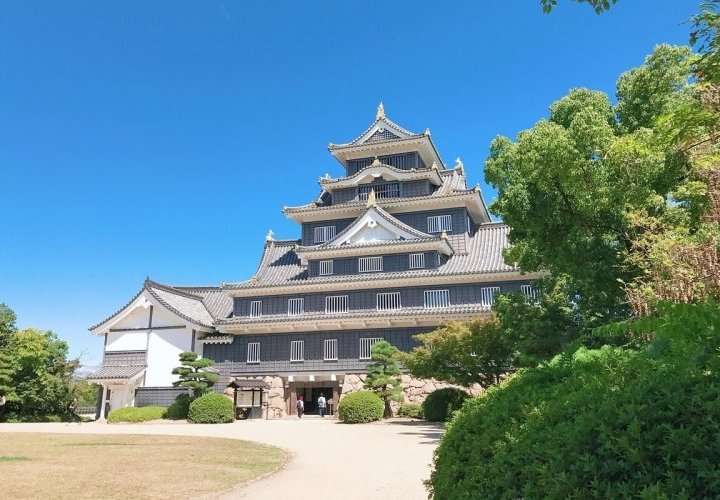 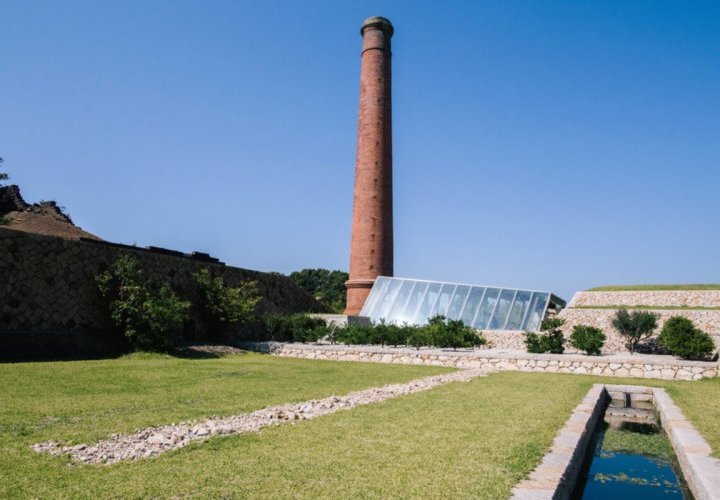 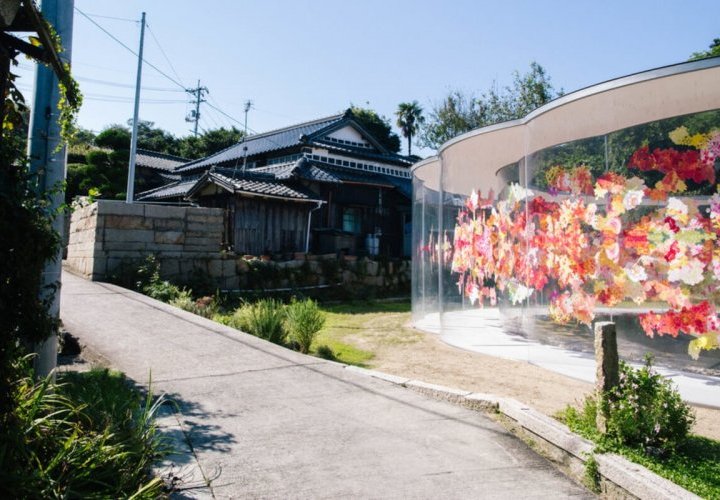 Okayama is the largest city in Chugoku region after Hiroshima and the capital of Okayama Prefecture. The city developed as a castle town during the Edo period (1603-1867) and has an estimated population of 720,841 inhabitants. The city is the site of Korakuen Garden, which is ranked as one of the top three traditional gardens in Japan. Across from the garden you can admire Okayama Castle, which is ranked among the best 100 Japanese castles.
TOURIST ATTRACTIONS IN OKAYAMA
Korakuen Garden
Korakuen Garden is one of the Three Great Gardens of Japan, along with Kenrokuen in Kanazawa and Kairakuen in Mito and Okayama’s main attraction. The garden was built in 1700 by Ikeda Tsunamasa, lord of Okayama and covers a total area of approximately 133, more
000 square metres. The garden is located on an island between the Asahi River and a developed part of the city and was designed in the Kaiyu (“scenic promenade”) style so that visitors could enjoy a new view of the scenery at every turn of the path connecting the lawns, ponds, hills, tea houses, and streams. The garden is arranged with wide lawns for open-mindedness and includes such attractions as the Enyo-tei House near the main gate, the Ryuten Rest House in the heart of the park, the Japanese cranes bred in the park, the plum grove with 100 trees and seasonal flowers including spring cherry blossoms, irises, azaleas, etc.
Okayama Castle
Okayama Castle (Okayamajo), was built in 1597 in the style of the Azuchi-Momoyama period under the direction of Hideie Ukita, a daimyo of the Sengoku Period, and is nicknamed the "Crow Castle" due to its black exterior. This comes from the use of boards painted with black lacquer on the walls of the castle tower (Tenshukaku) that represented the architecture of the period. Only one of the original buildings of the castle escaped the destruction of the World War II, and this is the Tsukimi Yagura (“moon viewing turret”), which dates back to 1620. The six-story castle keep houses exhibits related to the history and development of the castle. Furthermore, there is also a pottery studio where visitors can craft Bizen-yaki (type of local pottery in Okayama Prefecture), a corner for visitors to dress up in kimono and a small restaurant.
Kibi Plain
Kibi Plain is a rural flatland just outside of Okayama city named after the Kibi Kingdom, an ancient clan that ruled the region during the 4th century. It is the perfect getaway for tourists who want to experience and see a more historic and traditional Japan and who are in search of Japanese folklore. Kibi Plain area is related to the famous folktale of Momotaro (Peach Boy), whose birthplace is said to be in Kibi. The famous legend tells the story of a small boy, born of a peach, who defeats a band of ogres who were terrorizing the countryside from a nearby island (sometimes associated with Megijima Island).
SIDE TRIPS FROM OKAYAMA
Inujima Island
Inujima is a small island that in Japanese means “Dog Island”, because of its resemblance to a sitting dog. Located near the northern coast of the Seto Inland Sea, it is the smallest and most picturesque of the three islands devoted to the art of this sea and can be explored entirely on foot. Like nearby Naoshima Island, Inujima has become known as a site for modern art in recent years with the aim integrating art in the environment of this island. As a result, Hiroshi Sambuichi built Seirensho Art Museum in cohesion with nature and the elements by tastefully incorporating an art gallery into the ruins of a copper refinery. Also, five unoccupied houses in the village were converted into five galleries of the Inujima Art House Project that have become permanent attractions on the island. 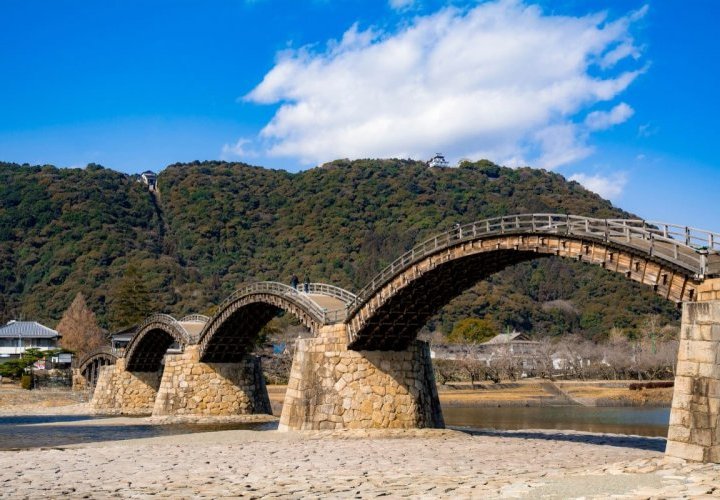 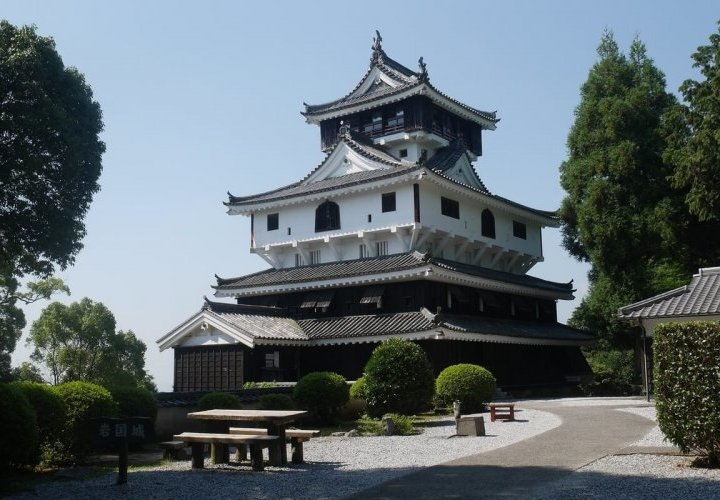 Iwakuni is a small city in southeastern Yamaguchi Prefecture that was formerly the castle town of Iwakuni formed by Lord Hiroie Kikkawa. Iwakuni han was ruled by the Kikkawa clan during the Edo period and flourished for 300 years until the Meiji Restoration. The city that was first founded on April 1, 1940 absorbed the towns of Kuga, Mikawa, Miwa, Nishiki, Shuto and Yu, and the village of Hongo on March 20, 2006 to create the new and expanded city of Iwakuni. The city has a population of around 150,000 people.
TOURIST ATTRACTIONS IN IWAKUNI
Kintaikyo Bridge
Kintaikyo Bridge is a historical wooden arch bridge that has been the most distinguished landmark in Iwakuni. The elegant wooden bridge was built in 1673 and spans the Nishiki River in a series of five wooden arches originally built without nails from Japanese cypress, more
chestnut and oak. The construction of the bridge was initiated by Kikkawa Hiroyoshi, the third lord of Iwakuni. The bridge, completed in 1673 stood until 1950, when the city was struck by a violent typhoon. Shortly thereafter, the residents began constructing a precise reconstruction of their cherished bridge that was completed in 1953. In 2000s, Kintaikyo Bridge underwent its first renovations since its reconstruction. It is located at the foot of Mt. Yokoyama, at the top of which is situated Iwakuni Castle.
Iwakuni Castle
Iwakuni Castle was built from 1601 to 1608 by Kikkawa Hiroie as his own castle. The original castle lasted only slightly longer than the time it took to construct it, being dismantled as per the Ikkoku-ichijo ("One Castle Per Province") order established by the Tokugawa Shogunate in 1615. The current reconstruction that dates back to 1962 is a ferro-concrete construction that displays inside it samurai swords, armour and other items related to the history of the castle. The castle’s keep is four stories high, and looks out onto the city 200 metres below. It was selected as one of the 100 Great Castles of Japan by the Japan Castle Foundation in 2006.
Kikko Park
Kikko Park was originally (1603-1867) the residence of the Kikkawa clan, the former lords of Iwakuni. Later it became a school and afterwards, in more recent years, a public park. The visitors are greeted by the statue of Kikkawa Hiroyoshi, the third lord of Iwakuni. In the area behind the statue and around Kikko Park you can see a number of sites of interest, such as former samurai residences and museums featuring historic artefacts including Choko-kan Museum, Kikkawa Museum, Iwakuni Art Museum, Mekata Residence and Nagayamon Gate. The park is an excellent site for nature enthusiasts in spring, when more than 3,000 cherry trees in blossom in combination with the magnificent bridge form a sight you will never forget.
View country