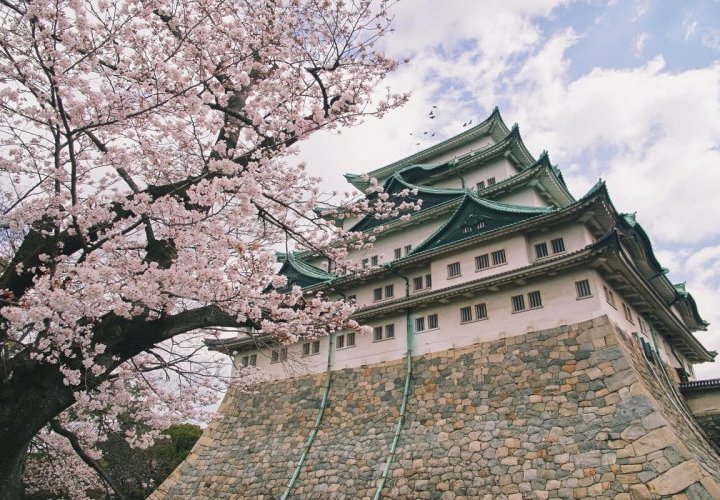 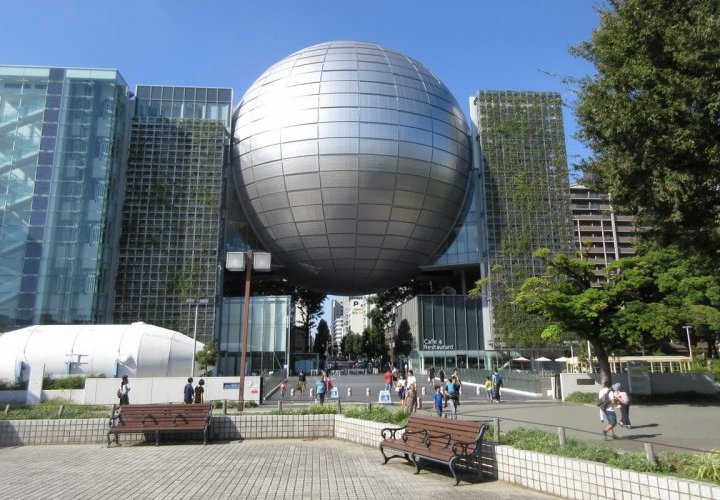 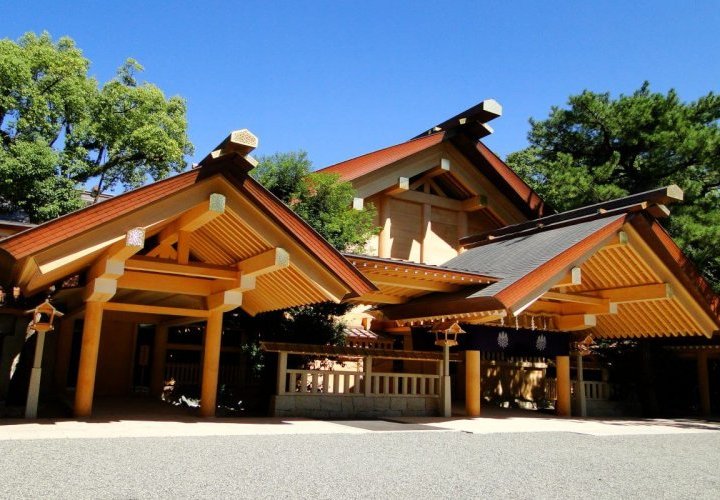 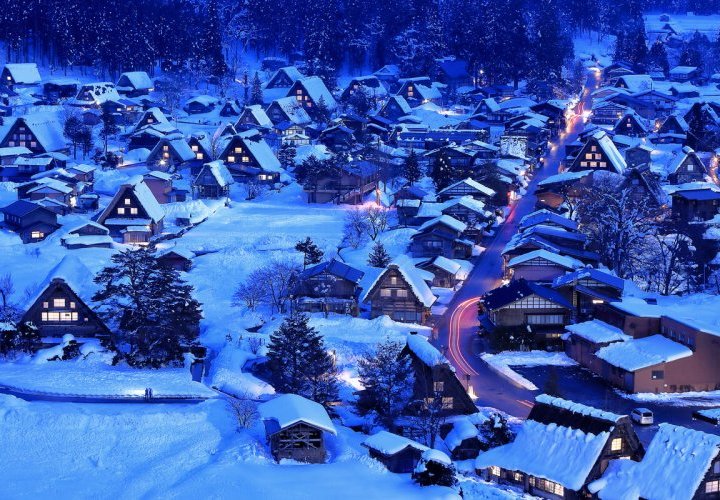 Chubu is a region in the middle of Honshu between the Kanto region and the Kansai region and consists of nine prefectures: Aichi, Fukui, Gifu, Ishikawa, Nagano, Niigata, Shizuoka, Toyama, and Yamanashi. The region is the widest part of Honshu and the northern part including the Sea of Japan coast is also known as Hokuriku region, while the southern part is also known as Tokai region. It includes the major city of Nagoya, as well as Pacific Ocean side, sunny in winter, and the Sea of Japan side, snowy in winter. It has high and extensive mountains in the central part and the magnificent Mount Fuji.
Nagoya city located on the Pacific Coast on central Honshu is the largest city in Chubu region of Japan. It is the capital of Aichi Prefecture, the main city of the Nobi Plain and one of Japan’s major ports. more
With over two million inhabitants, Nagoya is Japan’s fourth most populated city and the centre of Japan’s third-largest metropolitan region, known as the Chukyo metropolitan area.
Nagoya has a long history but it was especially defined after the establishment of Nagoya Castle. After being victorious at the Battle of Sekigahara in 1600, Tokugawa Ieyasu became the first Shogun (military ruler of Japan) and built Nagoya Castle. The first lord of Nagoya Castle, Tokugawa Yoshinao, improved the infrastructure of Nagoya as a castle city, which contributed to the prosperity of the Owari, one of the three branches of the ruling Tokugawa family during the Edo period (300 years). During the rule of the seventh lord, Muneharu, culture, including Noh, Kyogen and tea ceremony flourished. Culture flourished after the feudal Edo period and the beginning of the Meiji era, but during World War II many old buildings and artefacts were destroyed. The economic and financial power of the region in the post-war years rekindled the artistic and cultural scene. Many cultural items ranging from crafts to books that illustrate the development of Nagoya and the prosperity of the Owari Tokugawa family are exhibited at Tokugawa Art Museum.
TOURIST ATTRACTIONS IN NAGOYA
Nagoya Castle
Nagoya Castle was completed in 1615 by the Shogun, Tokugawa Ieyasu, being one of the largest castles in the country. It was the heart of one of the most important castle towns in Japan, Nagoya-juku that ultimately became Japan’s fourth largest city. The castle’s palace (Honmaru Goten) has been considered one of the finest examples of Shoin architecture in all Japan. Nagoya Castle was the first castle of Japan designated a National Treasure. The current ferro-concrete main keep of the castle is scheduled to be demolished in 2023 and the reconstruction of a wooden main keep is scheduled to end in 2028.
Nagoya City Science Museum
Nagoya City Science Museum is located in the centre of Nagoya city and features a giant silver globe that houses one of the largest planetariums in the world. Due to the permanent exhibits of the museum, the visitors can learn science through interactive experiments by using touch-screen tablets and other technology.
Atsuta Shrine
Atsuta Shrine is one of the most important Shinto shrines of Japan. It enshrines the Sun Goddess Amaterasu and stores the ancient sword Kusanagi no Tsurugi that is considered one of the Three Sacred Treasures of Japan. The sword is one of the three imperial regalia but it is never displayed to the public. However, Atsuta Jingu Museum preserves and displays many historic items, including the koshinpo (sacred garments, furniture and utensils for use of the enshrined deities).
Osu Kannon Temple
Osu Kannon is a Buddhist temple originally built during the Kamakura Period (1192-1333) in Gifu Prefecture and moved to its current site in 1612 by Tokugawa Ieyasu. The temple is known for the wooden statue of Kannon, the goddess of mercy that is the main object of worship at the temple, while underneath Osu Kannon’s main hall there is Shinpukuji Library that contains over 15,000 classic Japanese and Chinese texts.
SIDE TRIPS FROM NAGOYA
Shirakawa-go and Gokayama
The Historic Villages of Shirakawa-go and Gokayama were declared a UNESCO World Heritage Site in 1995. They are famous for their traditional gassho-zukuri farmhouses with steep thatched roofs, some of which are more than 250 years old. They are located in the remote Shogawa River Valley, a mountain region with considerable snowfall and were designed in such way to easily shed snow from their roofs. 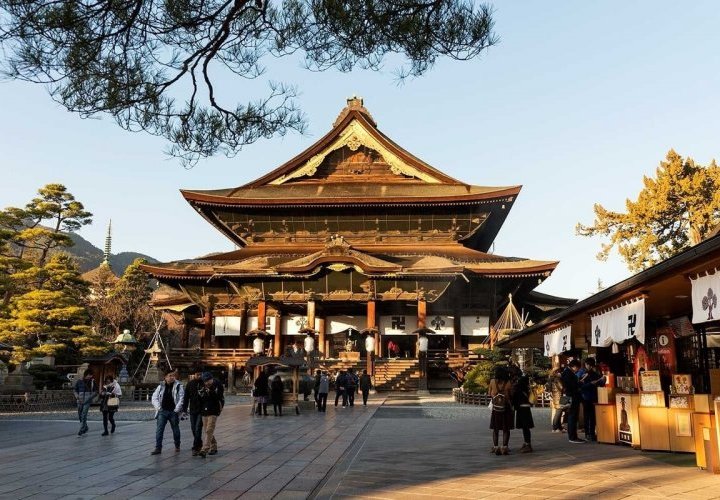 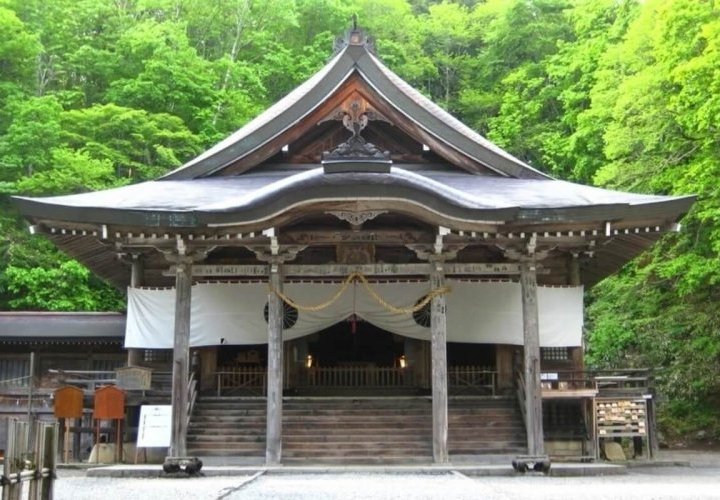 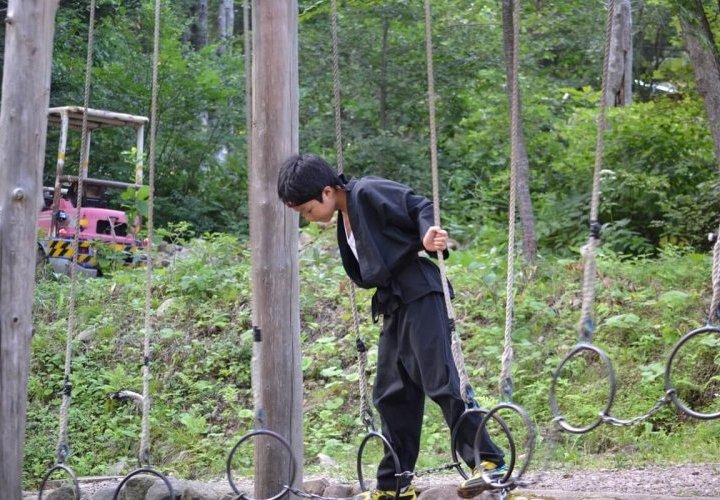 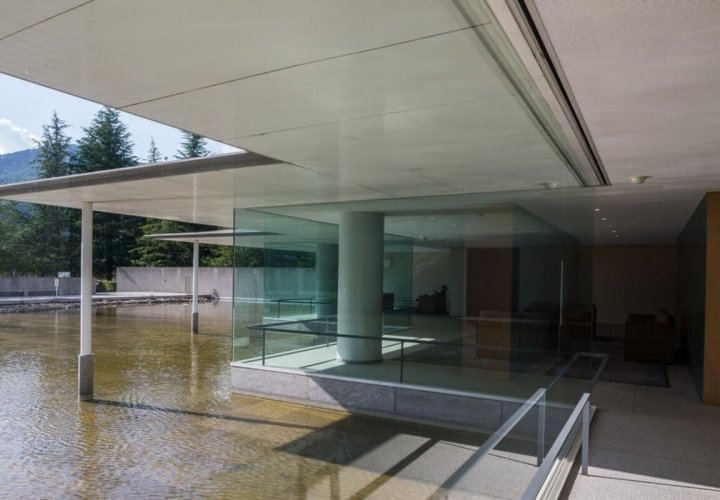 Nagano city is the capital of Nagano Prefecture and developed from the Nara period (AD 710 to 794) as a temple town around Zenkoji, one of the most popular temples in Japan. The city is surrounded by mountains, near the point of confluence of two rivers: the Chikuma River (Shinano River), which the longest and the widest river in Japan and the Sai River. The Togakushi area that lies in the forested mountains northwest of the city centre attracts tourists with its popular shrines and as the legendary home of Togakure Ninja School. Nagano has a total area of 834.81 square kilometres and an estimated population of 370,632 inhabitants.
TOURIST ATTRACTIONS IN NAGANO
Zenkoji Temple
Zenkoji Temple (Temple of the Benevolent Light) is a Buddhist temple located in Nagano and was built in the 7th century. more
It stores the first Buddhist statue ever brought to Japan when Buddhism was first introduced in the 6th century. The original statue is hidden, while a replica of it is shown to the public every six years for a few weeks. The main hall of the temple was rebuilt in 1707, is nicely ornamented and contains various Buddhist statues. In the basement of the inner chamber of the hall, there is an underground passage, which visitors walk through in complete darkness in search of the "key to paradise". The key, which is attached to a wall along the corridor, is believed to grant salvation to anybody who touches it. Behind the main hall, you will find a relatively recently built pagoda that houses the Zenkoji History Museum showcasing a collection of intricately carved statues of different Buddhas and Bodhisattva and displaying 100 Rakan, the disciples of Buddha.
Togakushi Shrine
Togakushi Shrine comprises a lower, a middle and an upper shrine in the forested mountains northwest of Nagano's city centre, that are connected both by roads and hiking trails up the forested slopes of the mountain. After arriving at the torii gate of the lower shrine, you will see a long flight of stairs that lead to its praying hall. Two kilometres upper from here, you will see the middle shrine, which stands at the top of a small town of shops and restaurants and boasts a praying hall, a small waterfall and sacred trees that are over 800 years old. A two-kilometre ascent from here takes you to the upper shrine, whose main hall spectacularly stands in the steep mountainside of Mt. Togakushi with the mountain peaks towering above. An alternative trail to the upper shrine leads via Kagamiike ("Mirror Pond"), a serene pond that reflects the surrounding mountain landscape.
Kids Ninja Village
The Kids Ninja Village is a small theme park with many ninja related attractions located in Nagano city. The village is set within a forest on Mt. Togakushi, features many obstacle courses and jungle gyms for visitors who want to undergo ninja training and is home to the legendary Togakure Ninja School. It also has some attractions that can appeal to some adults, including the nearby Togakure Ninpo Museum.
Nagano Prefectural Shinano Art Museum
Located a short walk from Zenkoji Temple in Joyama Park, Nagano Prefectural Shinano Art Museum was founded in 1966 and stages exhibitions of fine art works done mostly by artists who were born in or are related to Nagano Prefecture or depict the beautiful scenery of Shinshu. In 1990, the Higashiyama Kaii Gallery opened as an annex to the museum. The gallery exhibits the works of Higashiyama Kaii, who drew many paintings with the scenery of Nagano and donated them to the gallery. Higashiyama Kaii Gallery received further donations of works and the collection currently counts more than 970 works, consisting of honseisaku (final paintings), sketches and shusaku (studies), shitazu (underdrawings), etc.
SIDE TRIPS FROM NAGANO
Matsumoto Castle
Matsumoto Castle is one of the most beautiful original castles of Japan, also known as the "Crow Castle" due to its black exterior. It is located in the city of Matsumoto, Nagano Prefecture and was the seat of the Matsumoto domain. The main castle keep and its smaller, second donjon were built from 1592 to 1614. In 1635, a third turret and another one for moon viewing were added to the castle. The interior of Matsumoto Castle includes steep wooden stairs, openings for archers, openings to drop stones onto invaders, as well as an observation deck at the top sixth floor of the main keep with spectacular views over the city. In spring, it is a popular cherry blossom spot being visited by many people who stroll around the spacious castle grounds and park. 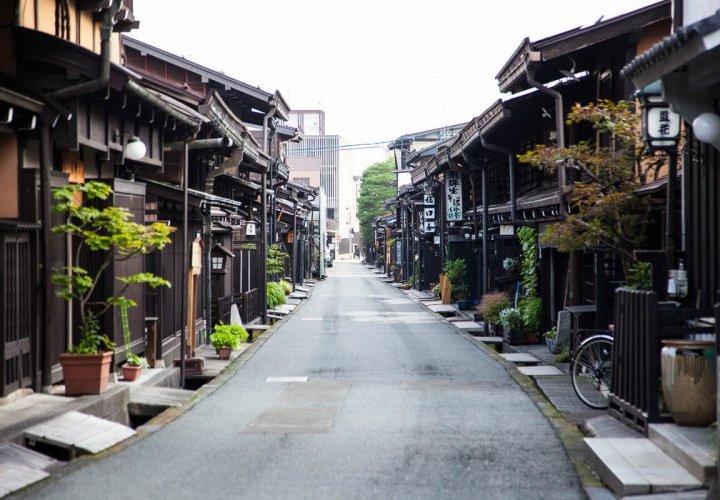 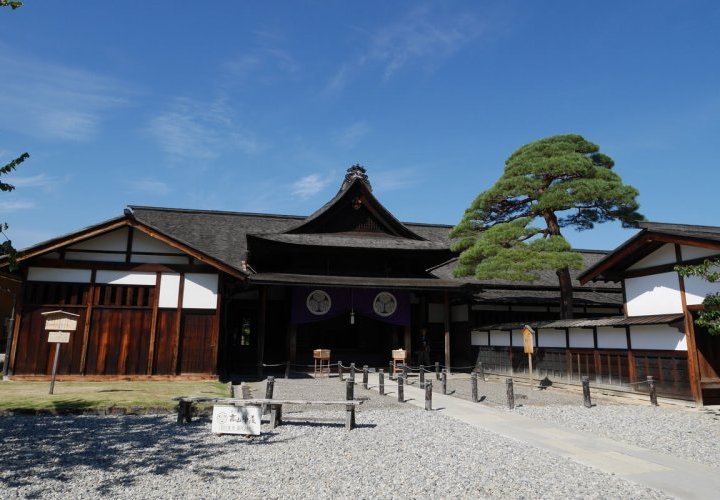 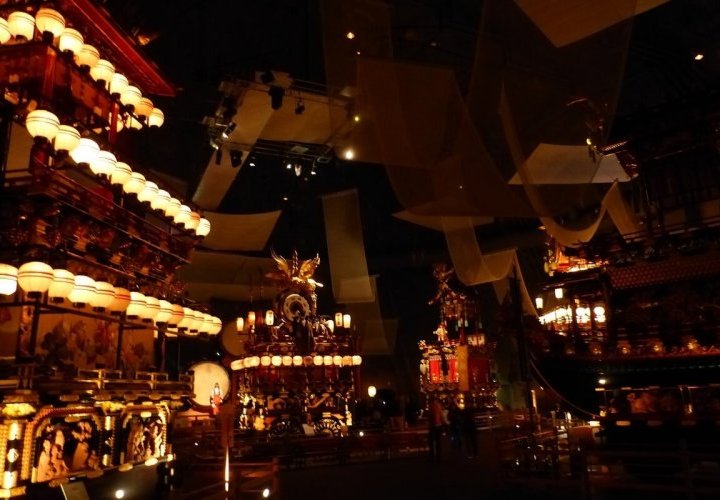 Takayama city is located in the mountainous Hida region of Gifu Prefecture, also referred to as Hida-Takayama and can be reached from Tokyo, Osaka and Nagoya using JR Railways. Due to its high altitude, this area was fairly isolated and separated from other areas in Japan, allowing the city to develop its own culture for about 300 years. Takayama is known for its beautifully preserved old town that retains a traditional touch and ranks as one of the prime candidates among travellers wishing to add a rural element into their itineraries.
TOURIST ATTRACTIONS IN TAKAYAMA
Old Town
Takayama’s Old Town is a beautifully preserved district filled with numerous buildings and streets of houses from the Edo Period (1600-1868), more
reminding of the days when the city was a wealthy town of merchants. The southern half of the old town, especially the Sannomachi Street, stands out for its particularly traditional atmosphere with many old homes, shops, coffee houses and sake breweries. Some attractions in the southern area are the Old Sake Breweries, Fujii Art Gallery (Fujii Bijutsu Mingeikan), also known as Fujii Folk Craft Museum, housed in an old building with a beautiful gate along Sannomachi Street, Hida Minzoku Kokokan (Hida Archeology Museum) and Takayama Museum of History and Art.
The northern area includes Sakurayama Hachiman Shrine (Sakurayama Hachimangu) that has a mystical atmosphere and is normally not very crowded, Takayama Yatai Kaikan (festival float exhibition hall) that exhibits four of the Autumn Festival's eleven festival floats, Karakuri Museum (mechanical doll museum) and Kusakabe Heritage House (Kusakabe Mingeikan) - one of Takayama’s oldest merchant houses open to the public.
Takayama Jinya
Takayama Jinya served as the local government office used by local deputy and administrator during the Edo period. The building complex, which was in official use until 1969, has very well maintained tatami mat rooms that once served as offices, conference rooms, guest rooms and residential space. The building is now open to public as a museum offering you the possibility to have a close look at the architecture and usage of its premises.
Matsuri no Mori
Matsuri no Mori (lit. "Festival Forest") is a museum located outside of Takayama’s city centre holding the festival floats that are used in Takayama Matsuri, known as one of the three most beautiful festivals of Japan, along with Gion Matsuri in Kyoto and Chichibu Yomatsuri. At the main exhibition space located underground, many life-sized replica floats and several huge taiko drums are displayed offering visitors a close view at their elaborate designs. 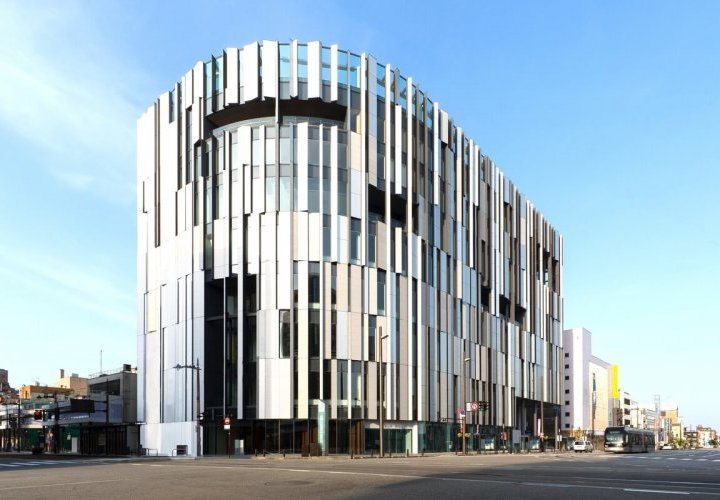 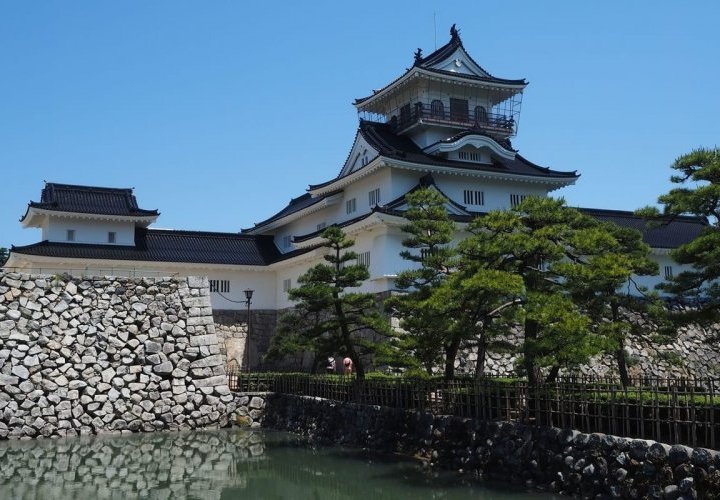 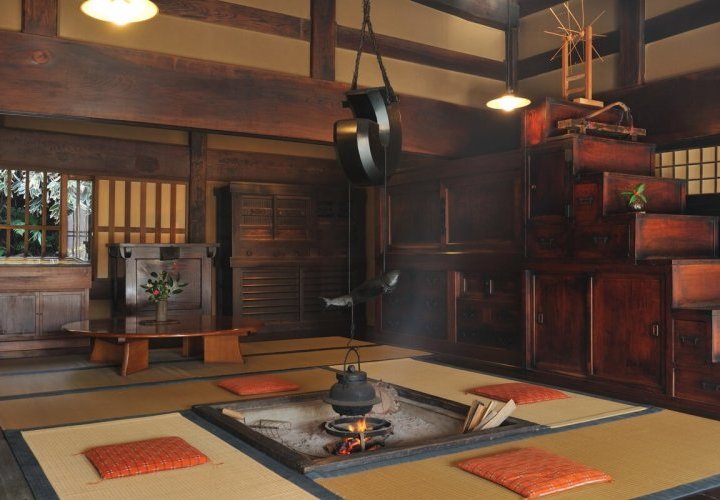 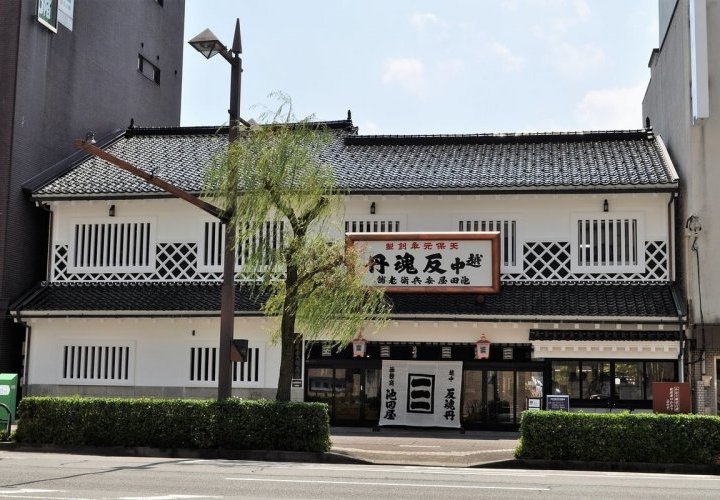 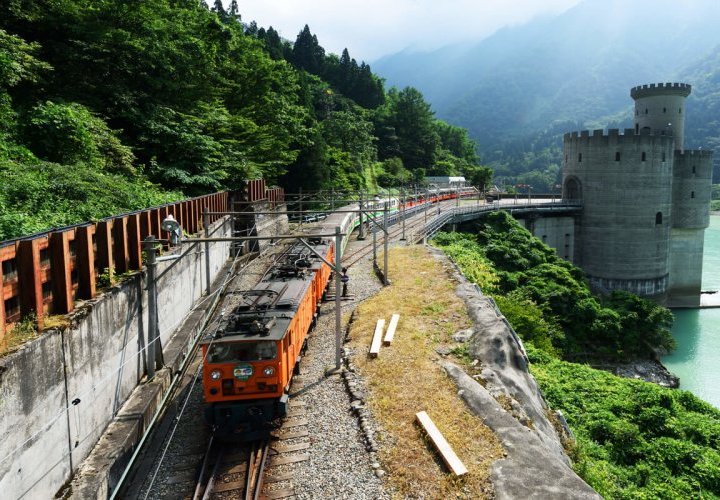 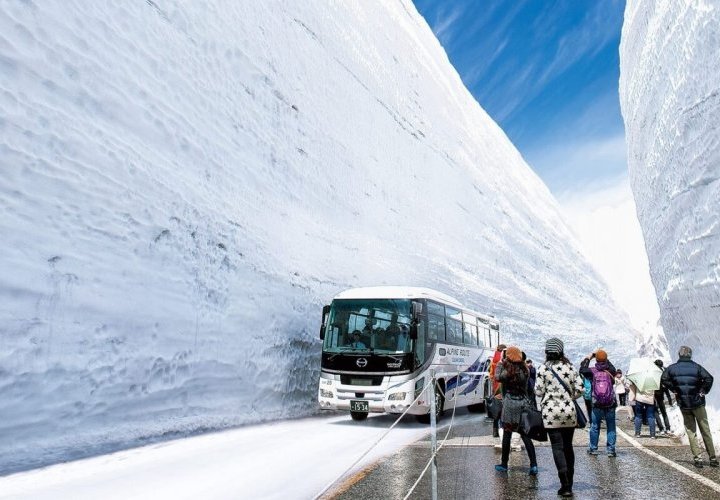