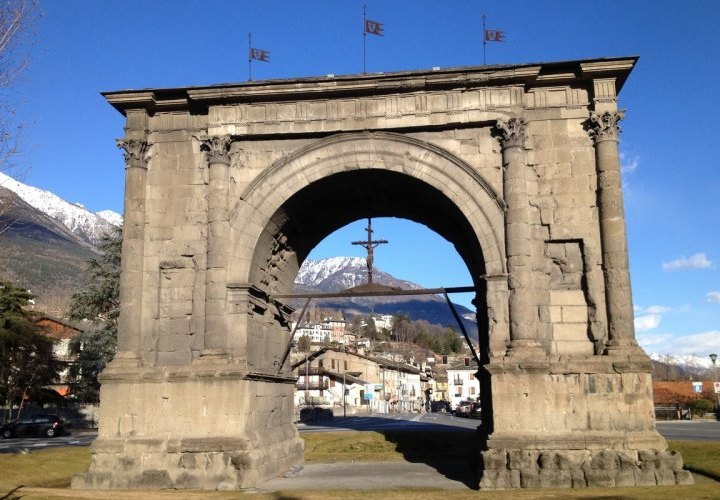 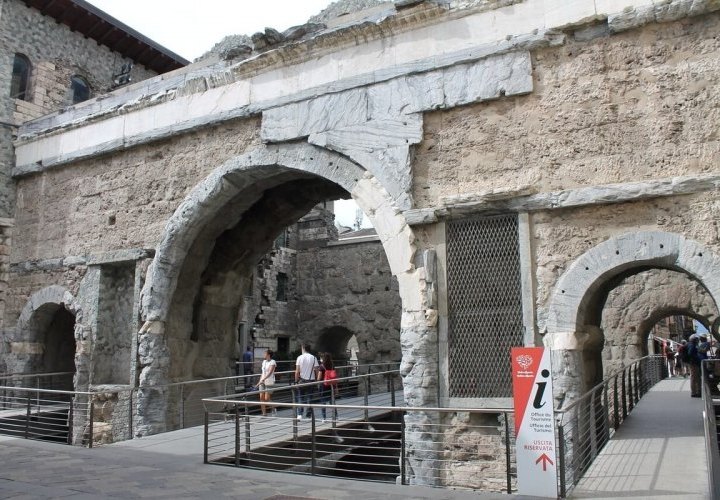 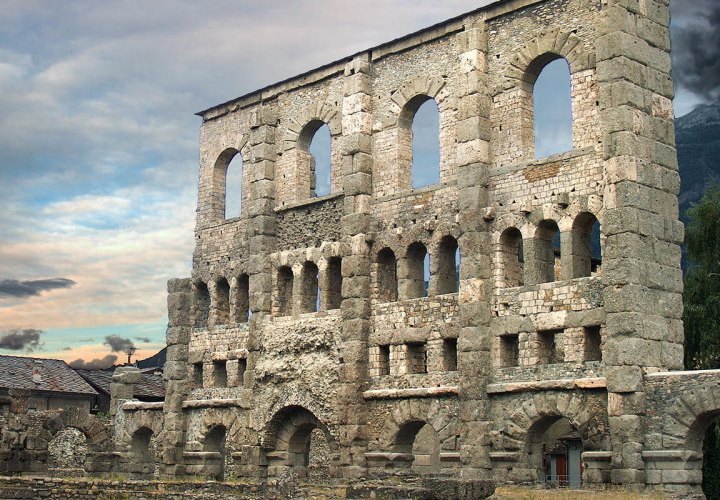 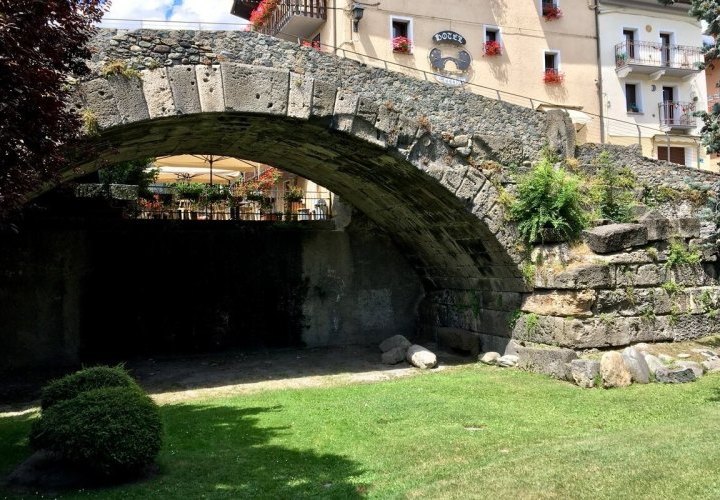 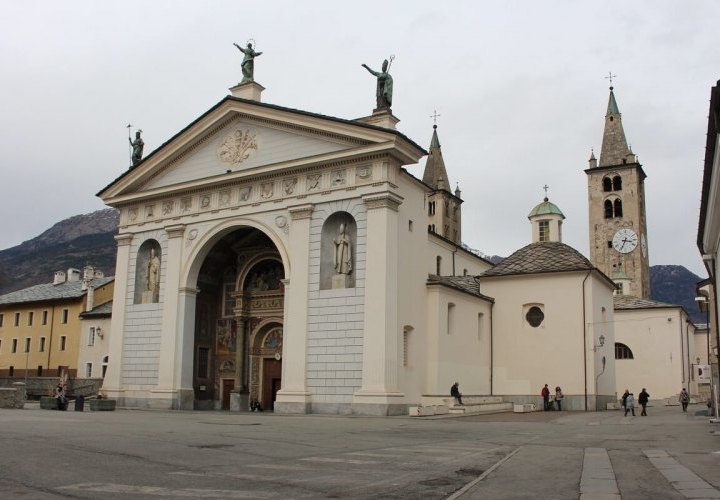 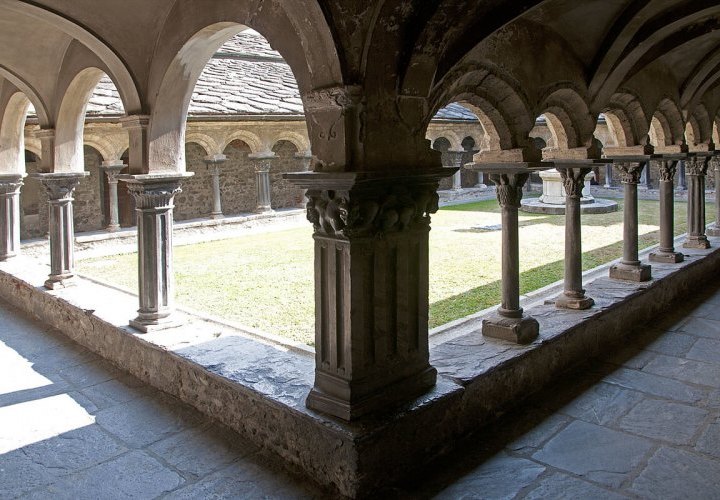 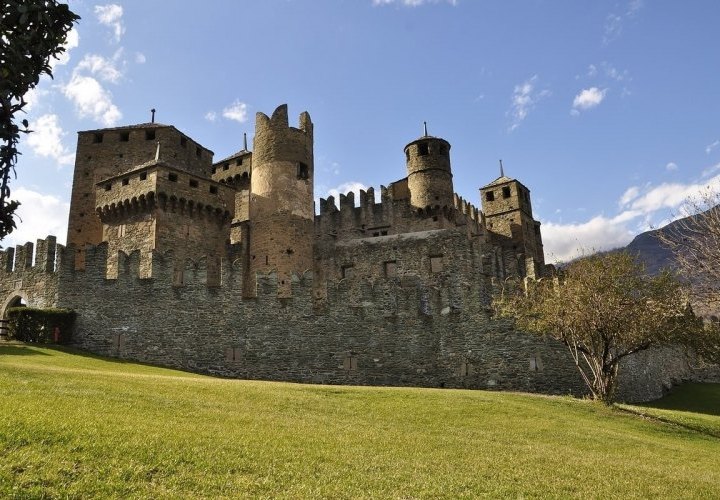 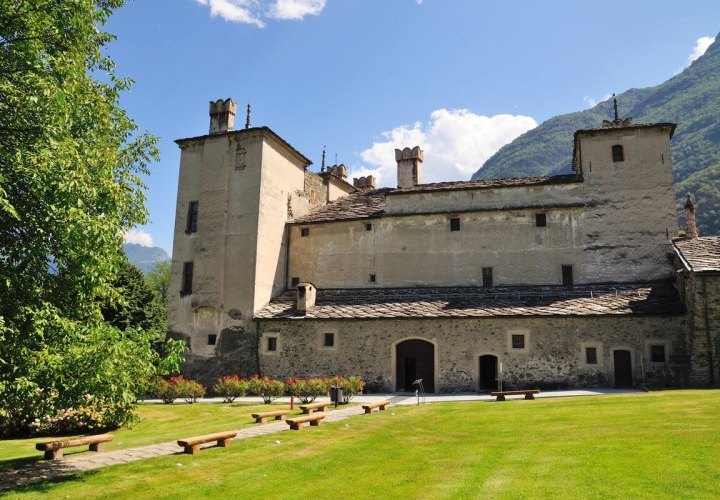 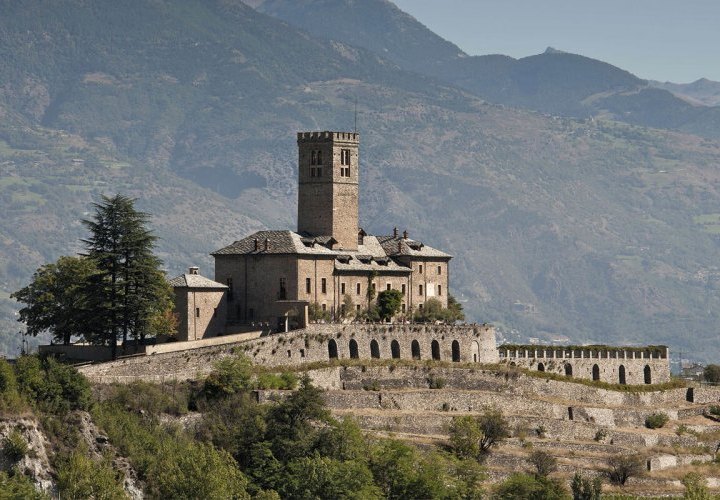 Situated at 631 metres above sea level, Sarre is a town and comune in Aosta Valley region. It offers good accommodation possibilities is often chosen by the tourists who look for easy access to the valleys of the Gran Paradiso National Park and the surroundings of Aosta. The territory extends over a very large area, which also reaches 3.061 meters of altitude of Mont Fallère, the tripoint connecting the Italian comunes of Sarre, Gignod and Saint-Pierre. The trekking lovers can reach the summit of Mont Fallère starting from the hamlet of Thouraz, while the mountain bike or on horseback lovers can opt for several routes in the area of Ville-sur-Sarre.
TOURIST ATTRACTIONS IN SARRE
Sarre Royal Castle (Castello Reale di Sarre)
The Sarre Royal Castle was built in 1710 on the ruins of a fortress mentioned documentarily as early as 1242. more
It stands on a promontory in Sarre commune, Lalex frazione (ward), overlooking the Aosta flatland above the national road for Mont Blanc. After becoming the private property of the first king of Italy, Victor Emmanuel II, in 1869, the Sarre Royal Castle was used as his headquarters for expeditions in the valleys of Cogne, Rhêmes and Valsavarenche.
The regional authority of Valle d’Aosta purchased the estate in 1989 to restore it and today it is a museum where the presence of the Savoy dynasty in the region can be seen. The rooms on the second floor retrace, with their furnishings and portraits, the history of the Savoy dynasty during the 20th century. A hall for 112 people is available for meetings or exclusive evenings.
Parish Church of Saint-Maurice
The Parish Church of Saint-Maurice was built in 1643 and was extended in 1896 in Saint-Maurice frazione (ward) of Sarre commune. From the ancient church remains the semi-circular apse, where you can admire the remarkable frescoes made around 1430, attributed to Giacomino da Ivrea. The church underwent substantial changes over time, in particular at the end of ‘800, when on the initiative of the parish priest Thomas Lale Murix of Saint-Pierre it was lengthened by 5 metres and raised by approximately 1.20 metres. In the premises of the Parish Church of Saint-Maurice there are sacred art objects such as wooden sculptures, goldsmiths and fabrics, which come from the chapels of Ville-sur-Sarre, Bellun, Champé, as well as from the parish church itself. The highlights of the church are the coloured wooden statue of Saint Maurice on horseback from the early 15th century, a splendid painted wooden statue from the 14th-15th century, unique among Aosta Valley for its verticality, three processional crosses and numerous gilded silver chalices of exquisite workmanship and three reliquaries dating from the 14th to the 17th century.
“Sources du Ruet” picnic area
“Sources du Ruet” picnic area represents a mature woodland consisting of Scotch pine, Larch and Fir trees and a few broad-leaved trees such as Willow and Trembling Aspen. You can reach the area by taking the road leading from Sarre up to Ville-sur-Sarre frazione (ward) and reaching the Bellon frazione (ward). The access to the area is free, but wood is not provided. 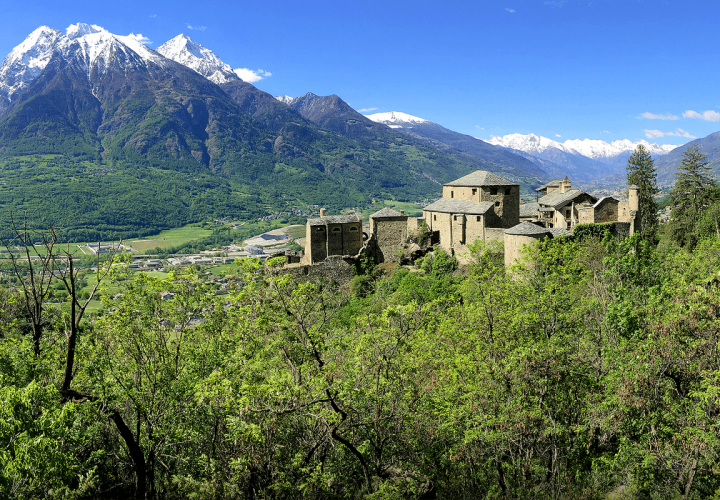 Situated at an altitude of 536 metres, Quart is a town and commune in Aosta Valley region. The name Quart is of Roman origin and indicates the distance of 4 miles from Aosta. The territory of Quart is very wide and scattered in many hamlets for which the agriculture plays an important role, favoured by the particularly sunny position. Quart is also known for its viticulture and flourishing production of high quality wines, as well as the famous Fontina cheese. The name Fontina could be traced back to the name of a mountain pasture belonging to the municipality of Quart - Alpe Fontin - where this cheese was created in the 13th century. Fontina cheese is made from unpasteurized cow's milk, has a soft texture with a minimal number of holes and a subtle taste of nuts and since 1996 has a certified label of origin.
TOURIST ATTRACTIONS IN QUART
Quart Castle
The Quart Castle is a castle in Quart commune, more
Villair frazione (ward) that was built starting from 1185 by Jacques de la Porte de Saint-Ours, founder of the Lords of Quart. The castle is a set of buildings arranged within a fortified perimeter and initially had a military defence purpose at the gates of the east village of Aosta. Around the end of the 14th century, the castle passed to the Lords of Savoy who used it as a residential dwelling until 1550, when it was sold to Philibert Laschis who in turn sold it almost immediately to Charles-François Balbis. In the 17th century, the castle belonged first to Count Nicholas Coardo and then passed to the Perrone of San Martino, who gave it to the Municipality of Quart in 1800. The castle houses valuable examples of architecture and painting that range from the 12th century to the 17th century.
Fortified House of Povil (Casaforte di Povil)
The Fortified House of Povil (Casaforte di Povil) is a fortified medieval complex located on the hill of Quart commune, Povil frazione (ward) and originally belonged to the lords of Quart. In the second half of the 14th century, the complex was purchased by Jean-Michel Piquart, lord of the manor of Quart at the time and a member of the La Tour family of Courmayeur being transferred to Carlo Filippo Perrone, baron of Quart in 1680.
On the eastern side of the complex, the tower has a remarkable arched door and carved stone windows. The main housing body with two windows in the Gothic style overlooks the internal courtyard and has the Piquart de la Tour coat of arms, dated 1627 at the entrance.
Neolithic Vollein Necropolis
On the slopes below the Quart Castle, in the Les Cleyyes area in Vollein frazione (ward), Quart commune, remains of the Neolithic Vollein necropolis were found in 1968. They are considered one of the first traces of human settlement in Aosta Valley and include more than 60 chest-shaped tombs from the Ice Age and rupestrian engravings dating back to the II millennium BC. The geological site of Vollein has some extremely significant geological, geomorphological and cultural aspects within a limited surface area. 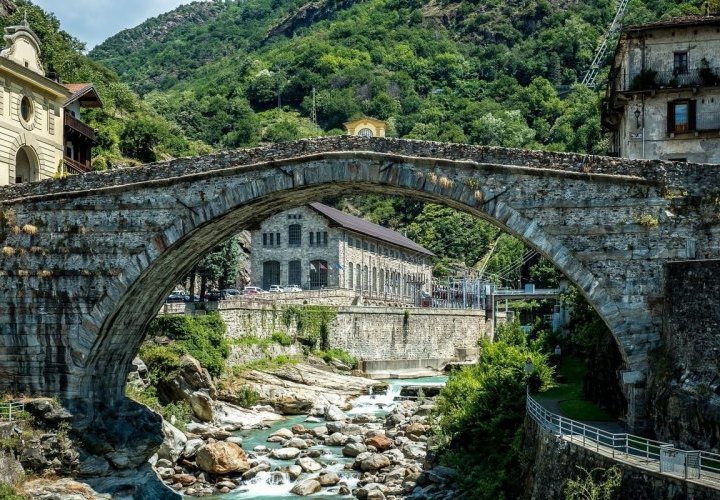 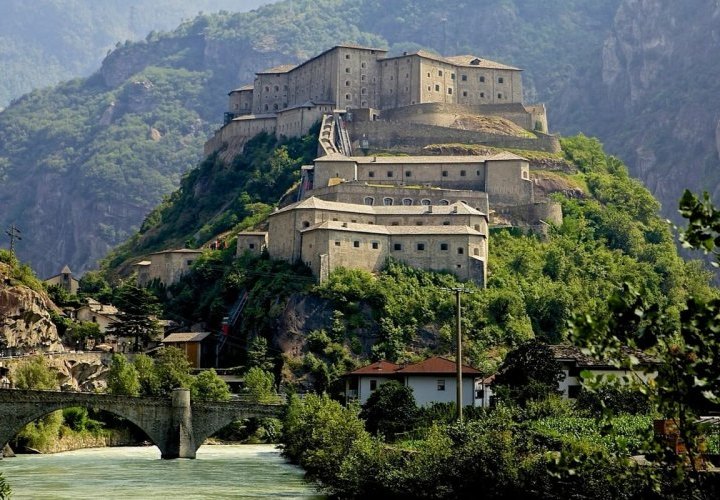 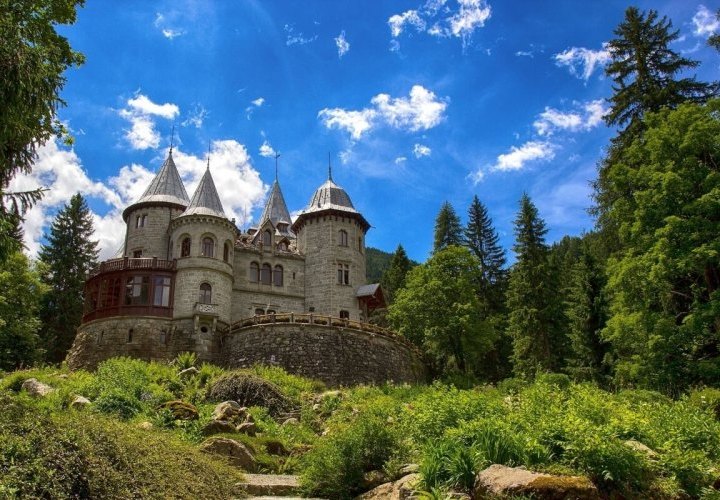 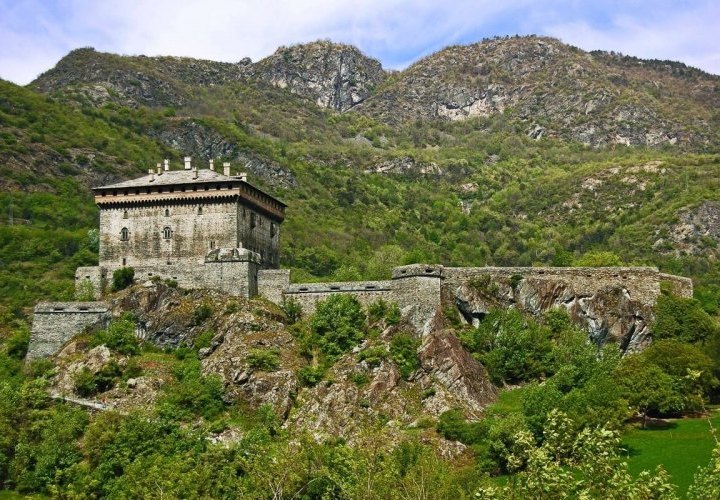 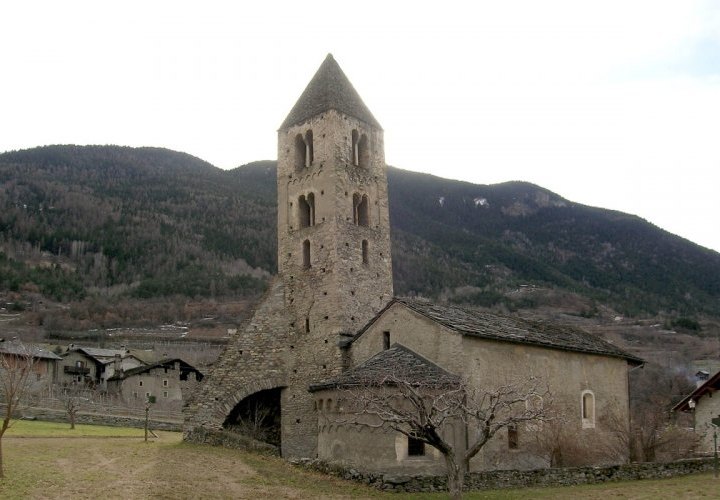 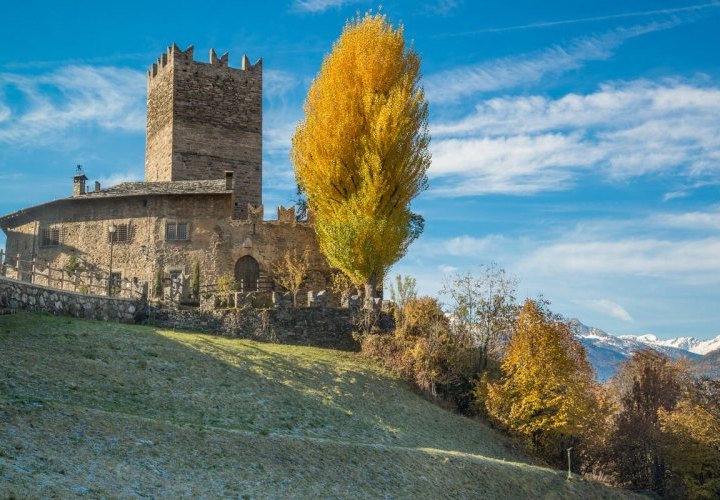 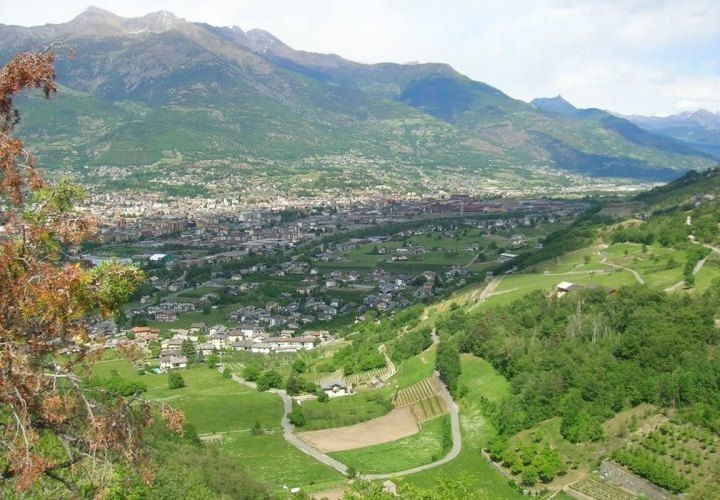 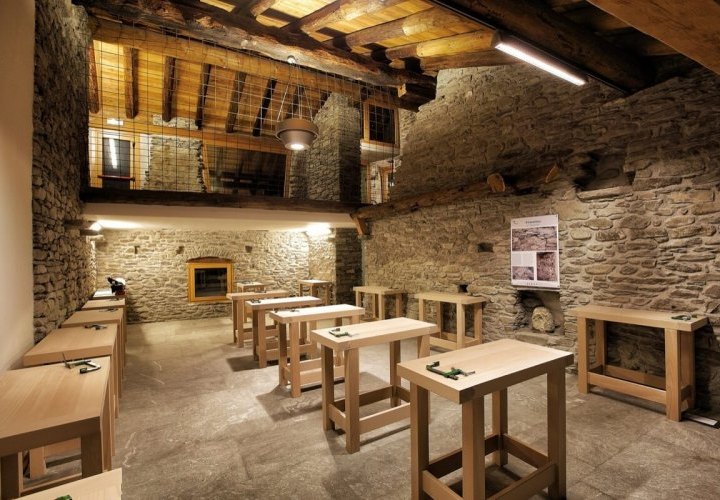 Gressan is a town and commune in Aosta Valley region, only 5 km away from Aosta town. It lies among wide orchards in the vast flat area of Aosta and was already inhabited during the Roman period. It is known for its towers and the religious buildings dating back to the Middle Ages that host some precious but uncommon artistic treasures, for Pila, both a ski resort and a significant destination for mountain bike, as well as for the excellent apple cultivation.
TOURIST ATTRACTIONS IN GRESSAN
Church of Sainte-Marie-Magdeleine
The Romanesque Church of Sainte-Marie-Magdeleine also known as “La Magdeleine Chapel” is situated in Gressan commune, Favret frazione (ward) and is surrounded by flourishing orchards. The church was built in the 12th century and from the 14th to the 16th century, more
the church was rebuilt and endowed with new frescoes by the noble family La Tour de Villa. Some charming frescoes dating back to 1463, both inside and outside, were realised by Giacomino d’Ivrea. The church consists of an apse and a 12th century Romanesque bell-tower supported by a characteristic buttress, while the nave was extended in 1460. In 1786, the parish of Sainte-Marie-Magdeleine became part of the parish of Santo Stefano and since then the church has been confined to the role of chapel.
La Tour de Villa Castle
La Tour de Villa Castle stands a bit higher than the Church of Sainte-Marie-Magdeleine, in a dominant position between orchards and vineyards in Gressan commune, Tour de Villa frazione (ward). It was built entirely on granite rock and its most ancient part is the impressive 24-metre medieval tower with a square plan that reproduce the Roman scheme. Originally, La Tour de Villa Castle was comprised almost entirely of the central tower, but today the complex is made up of two different parts: the 12th-century tower and the semi-circular residential building dating back to the 14th century. The name of the castle is due to the union of two ancient noble families of Aosta Valley, the La Tour and the De Villa, who had the rank of Pari. At present, it hosts an accommodation structure and sometimes even small events.
Maison Gargantua
Maison Gargantua is an ethnographic museum, an exhibition hall, an educational space, a sculpture laboratory and the departure point for discovering the surrounding territory. A visit to the Maison will make you discover the ancient folk wisdom thanks to objects, pictures and decorations showing ancient local customs and traditions, which are a significant part of the autochthonous culture. Maison Gargantua of Gressan awaits you for an eco-demoanthropological journey, a synthesis of alpine civilization, in a natural setting that presents an unsuspected biological diversity.
Côte de Gargantua Nature Reserve
Côte de Gargantua Nature Reserve has a surface area 19 hectares, altitudes between 610 and 776 m and is a typical well-preserved evidence of the deposits left by the Wurmian Quaternary glaciers on bottom of the main valley. Located near the Dora Baltea River, it appears like an elongated accumulation extending from south to northeast with a sharp summit and steep slopes. The reserve is interesting in itself from a geological and naturalistic point of view offering from its top a broad view of the urbanized and cultivated area of Gressan.
It is a good starting point for people interested to discover plants, flowers, fauna and waterways. The protected area’s xerothermic aspects (dry and sunny grassy-rocky slopes and peaks) provides the right environment for unique steppe plants such as the Artemisia vallesiaca (a rare aromatic plant) or the European goldilocks and species of Mediterranean origin, such as Uva Ursi, Linaria Simplex and the rare Alpine Daphne. The fauna mainly consists of reptiles, birds of prey, songbirds and small rodents.
View guide